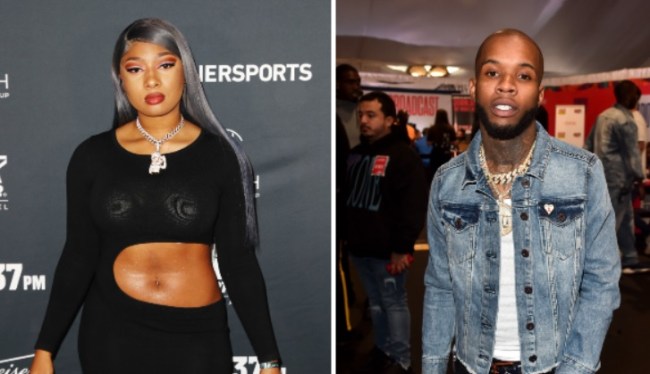 After keeping quiet for nearly a month, Megan Thee Stallion has confirmed that Tory Lanez shot her as she was trying to leave.

Last month Lanez was arrested after police found a gun in a car while he was riding with Megan. It was initially reported that Megan had cut her foot with glass but video evidence revealed that Lanez had shot the WAP rapper in the foot.

Tory fired the shots from within the vehicle while Megan was outside trying to leave,” a source exclusively told us on Thursday. “There is video and the police are investigating. This is a case of a man physically harming and abusing a woman.”

On Thursday night, Megan took to Instagram to confirm that Lanez had shot her in the foot and that he’s trying to use gossip blogs to disseminate misinformation about what went down on the night of his arrest.

“Y’all hoes so worried ’bout it. Yes, this n***** Tory shot me,”. “You shot me. And you got your publicist and your people going to these blogs lying and shit. Stop lying. Why lie? I don’t understand. I tried to keep the situation off the internet, but you dragging it. You really f*ckin’ dragging it. Muthafuckas talkin’ ‘bout I hit this n*****. I never hit you. M*thaf*ckas was like, ‘Oh she mad ’cause he was tryna f*ck with Kylie. No I wasn’t. You dry shot me.”

A day before revealing that Lanez was the shooter, Megan shared a gruesome photo of her gunshot wound in an effort to put to an end to people calling her a liar.

The LA County DA is currently considering charging Lanez with felony assault with a firearm after she came forward to talk about the shooting on social media.

The L.A. County D.A.’s Office is reviewing possible assault charges against Tory Lanez for his alleged involvement in the Megan Thee Stallion shooting … TMZ has confirmed.

The D.A.’s mulling over a charge of felony assault with a firearm after Megan said she was shot back in July as she exited the SUV she was riding in with Tory. As you probably know by now … he was arrested, but only charged with possession of a firearm. Now, it’s possible he’ll face the additional charge after prosecutors asked the LAPD to further investigate the incident.