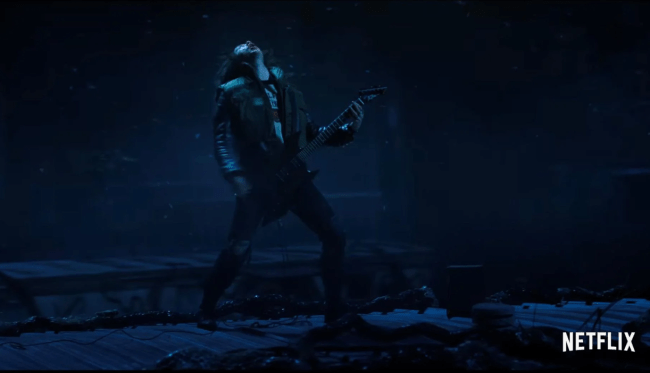 If you haven’t seen the final episode of Stranger Things season four and don’t want anything spoiled then click that back button right now.

However, if you have seen the final episode of Stranger Things season four, then you are very well aware of what big moment in the show involving Metallica that I’m referring to in the headline.

That moment takes place when Eddie Munson climbs on top of the mobile home in the Upside Down and attempts to draw all of the bats out of hell to him so the rest of the gang can try and defeat Vecna.

Eddie succeeds in drawing them bats in really the only way Eddie can… by rocking out and shredding Metallica’s “Master of Puppets” like a rock and roll god.

This week, Metallica showed that they appreciated Eddie Munson’s use of “Master of Puppets” in the war against Henry slash One slash Vecna as much as many of the Stranger Things fanbase did.

“The way The Duffer Brothers have incorporated music into Stranger Things has always been next level, so we were beyond psyched for them to not only include “Master of Puppets” in the show, but to have such a pivotal scene built around it,” the band wrote on Instagram. “We were all stoked to see the final result and when we did we were totally blown away… it’s so extremely well done, so much so, that some folks were able to guess the song just by seeing a few seconds of Joseph Quinn’s hands in the trailer!! How crazy cool is that?

“It’s an incredible honor to be such a big part of Eddie’s journey and to once again be keeping company with all of the other amazing artists featured in the show.”

The actor who played Eddie Munson, Joseph Quinn, recently spoke to Esquire about how he prepared for his big scene.

“I went to the guitar shop and I bought a guitar, and I started practicing manically,” he revealed. “I just remember being completely kind of dumbstruck with the kind of… there is a very specific world in which something like that could exist. And [series creators Matt and Ross Duffer] have created that world in which it doesn’t feel forced.”

“I had a bash,” said Quinn. “Who doesn’t want to feel like a rock star for an afternoon?”

Been a bit of a wild week, hasn’t it?https://t.co/ZtzZb48LkE