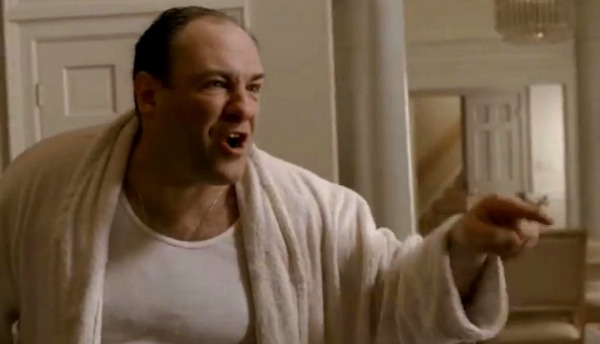 We learned the curious casting news that the upcoming Sopranos prequel movie would use Jame Gandolfini’s son as a young Tony Soprano in January. We are finally getting our first look at Michael Gandolfini portraying his dad’s infamous mafia father in the upcoming movie titled Newark, which was formerly titled The Many Saints of Newark.

The first photos from the set of the standalone Sopranos movie are out and by the looks of Michael Gandolfini, they did an amazing job of casting young Tony Soprano. The 19-year-old son of The Sopranos patriarch looks exactly like his father and is dressed in garb from the 1960s when this movie is set in.

If Michael can act half as well as his father, the producers made a great call. We’ll overlook that in the seventh episode of the first season of The Sopranos titled “Down Neck,” there was a flashback scene to Tony’s youth and he was a young boy in the late 1960s and not an older teen as seen in the photos. During the flashback, there was a live performance of “I’ve Been Lonely Too Long” by The Rascals on The Ed Sullivan Show from 1967.

The script for Newark was written none other than David Chase, who helmed HBO’s Sopranos TV series from 1999 to 2007. The Sopranos staff writer, Lawrence Konner helps in writing duties and the prequel is directing by Alan Taylor, who was a director on nine Sopranos episodes, as well as seven Game of Thrones episodes.

In other Sopranos movie casting news, fans of The Walking Dead and The Punisher will be happy to see the familiar face of Jon Bernthal. It hasn’t been announced who Berthal will play, but he looks like he is going to be a problem.

The Sopranos prequel takes you to Newark, New Jersey in 1967, when racially-charged riots divided the city. Alessandro Nivola, of American Hustle fame, will play Richard “Dickie” Moltisanti. Goodfellas star Ray Liotta is also in the film, but we don’t know his role yet. Newark hits theaters on September 25, 2020.