Michael B. Jordan Had An A+ Response To Being Trolled About Liking Anime, Living With His Parents 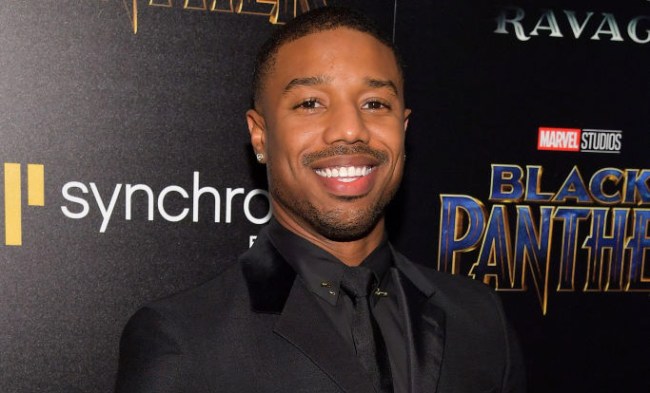 Michael B. Jordan is having himself a year, and it’s only February. His current movie, Black Panther, is breaking all sorts of box office records (even if he did lose a funny bet to his co-star Lupita Nyong’o). And by the looks of things, his sequel to Creed is going to be another big hit.

The 31-year-old actor is riding high like very people can in life right now. So if you’re going to come at him on Twitter with jokes about his height, love of anime and living with his parents, expect him to hit it out of the park when he responds. This is something a fan found out on Thursday.

“Michael B Jordan Is A 5’9” Adult Man That Loves Anime & Lives With His Parents….Y’all Told Me All Of Those Things Were Unacceptable Though,” tweeted @chrisfrom_216.

Michael B Jordan Is A 5’9” Adult Man That Loves Anime & Lives With His Parents….Y’all Told Me All Of Those Things Were Unacceptable Though

“First of All I’m 6ft and they live with ME, put some respeck on my name. LOL…aaaand goku & naruto are real ones 🙌🏾 lol,” wrote Jordan, not backing down on his anime love.

First of All I’m 6ft and they live with ME, put some respeck on my name. LOL…aaaand goku & naruto are real ones 🙌🏾 lol https://t.co/QspyHD2zwH

Nah that was a softball for the anime uneducated 🤓

Of course, Chrissy Teigen, queen of social media, had to drop in with a very appropriate joke.

Or rather the only two similarities? I’m tired goodnight sorry goodbye

Jordan isn’t kidding either when he says he knows his anime and he isn’t afraid to let anyone know it either.

Did you notice how much does Eric Killmonger’s costume in Black Panther look like Vegeta from Dragon Ball Z?

Then there was the time Jordan was asked what his guilty pleasure was and wrote “anime” before scribbling over it and changing it to “women.”

i'm watching an old michael b jordan interview and he got asked what his guilty pleasure is and he fucking wrote anime but scribbled it out and changed it to women i'm laughing pic.twitter.com/LVJIKcBlbj

“@mangastream: word is that Bleach is entering its final arc. Bleach will end this year most likely.” so sad so sad

@mangastream whats the delay on naruto and bleach

this is where I get all my ANIME @AnimeAvenue that new naruto shippuuden just dropped..yea I'm into anime I love this shit!

"Anime. It's the best." – Michael B. Jordan
I CANNOT BELIEVE pic.twitter.com/whMoe9KvDd