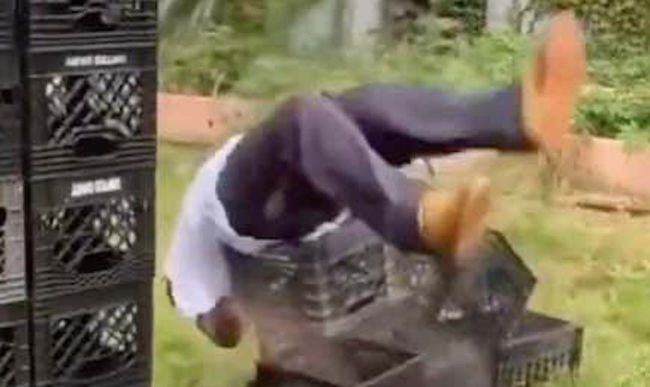 Capitalism and stupidity, folks: the core tenants of being a human being in 2021! At least as far as Amazon is concerned.

By now, unless you’ve literally been living under a rock (And if that’s the case, got any more room down there? Things are gettin’ pretty hair up here), then you’ve seen the Milk Crate Challenge on social media sometime over the last few days. In case you haven’t, though, co-worker Connor did an awesome job of recapping the madness.

Now, I’m not trying to get all Scrooge on ya — I think the Milk Crate Challenge is hilarious. People injuring themselves always is. Such is human nature, I suppose. Why do you think Ridiculousness has lasted for so long? Regardless of how I personally feel about it, though, there’s simply no denying that the Milk Crate Challenge, like most viral “challenges”, is born out of abject stupidity. I’ve already seen one dude break his leg — if this trend goes on long enough, it’s only a matter of time until someone breaks something worse.

Nevertheless, despite its danger, the Milk Crate Challenge has created a need in the market, leaving everyone’s favorite omnipotent conglomerate to come and fill the void: Amazon.

Now, to be fair, I’m totally not sure how much milk crates usually cost, but given that they can usually be found near dumpsters or in basements, I certainly never imagined they’d cost around $20 a pop. Is this normal? This is the nature of our reality these days: I’m trying to figure out what the average price of a milk crate is because people on Twitter have decided to start launching themselves off Egyptian pyramid-esque towers made of them.

I used to half-joke that I expected my grandkids to see the end of times, but with each passing day on this planet, it increasingly feels as though our generation will be the one to welcome the apocalypse. Happy Tuesday, everyone!