What Is The Milk Crate Challenge? Here’s Your Guide To The Viral Trend Taking The Internet By Storm 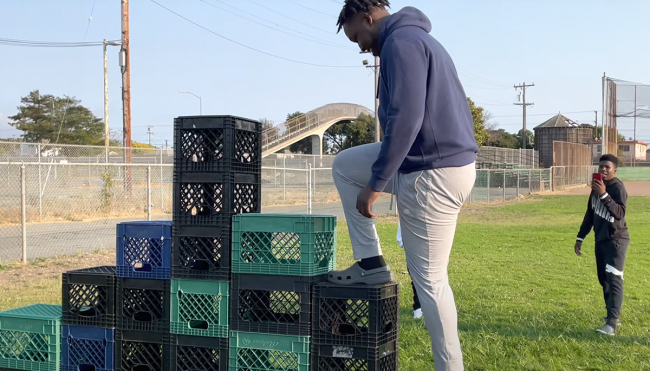 In 1980, a guy in England with way too much free time on his hands introduced the world to the concept of “extreme ironing.”

In spite of (or, perhaps, because of) its inherently absurd nature, the activity eventually attracted enough widespread interest to justify the creation of the governing body that was tasked with overseeing the so-called sport and coming up with an official description of its essence, painting the pastime as a hybrid that “combines the thrills of an extreme outdoor activity with the satisfaction of a well-pressed shirt.”

Extreme ironing is the kind of pursuit that answers the most pressing question surrounding it—”Why?”—with “Why not?” It’s an ethos that perfectly sums up most of the equally baffling trends that have taken the internet by storm in the past decade or so, whether we’re talking about planking, The Harlem Shake, or Bros Icing Bros.

With the notable exception of the Ice Bucket Challenge, virtually every viral trend that tasks online denizens to prove their mettle by doing something like housing a spoonful of cinnamon, snorting a condom up their nose, or throwing a Tide Pod down their gullet has the same raison d’être; it’s something you do just to prove that you can do it, and the only real reward for successfully completing it is a bit of online clout.

That would also appear to be the case with a new fad that’s set the internet ablaze: the Milk Crate Challenge.

If you’ve hopped on social media in the past few days, you’ve probably come across at least a couple of videos of people attempting to traverse mountains of plastic containers with varying degrees of success.

these crate challenges getting out of hand 😭😭😭😭😭😭 pic.twitter.com/1kVkTXSDwD

People have also dreamed up some ways to take the Milk Crate Challenge to the next level by adding an additional layer of difficulty, including one woman who completed it while rocking high heels and a dude who rolled a blunt he sparked in celebration after emerging unscathed.

Here we have the official Gold Medalist of the Hood Olympics
pic.twitter.com/bU6X0eHBei

I assume I’m far from the only person who had a few questions after encountering the Milk Crate Challenge for the first time. If you’re in the same boat, you’ve come to the right place, as I took the time to put together a quick crash course to get you up to speed.

What Is The Milk Crate Challenge? 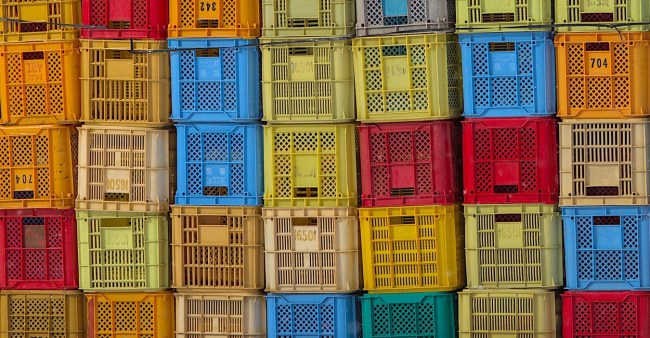 At its core, the Milk Crate Challenge is a spiritual relative of the kind of harebrained tests you’d expect to find on an episode of the Amazing Race or a network game show hosted by a B-list celebrity that gets quietly canceled after the first season.

The premise is simple: participants are tasked with conquering a pyramid made out of (you guessed it) milk crates that serve as stepping stones. There’s no standard height or length, but the ultimate aim is to make it from beginning to end without compromising the structural integrity of the makeshift mountain.

A sense of balance is the biggest asset when it comes to completing the Milk Crate Challenge, which gets increasingly difficult every time the stack gets higher due to the physics at play. Additionally, a lot of people seem to meet their downfall after reaching the summit, as forward momentum can make climbing down the pile a deceptively tricky task.

Where Did The Milk Crate Challenge Start?

Based on what the internet scholars at Know Your Meme have to say, the Milk Crate Challenge can arguably trace its origins back to a video of a guy who tried (and failed) to jump between six individual columns when he was presumably training for Ninja Warrior in 2011.

However, it seems like the Patient Zero for the recent viral trend came in the form of a Facebook Live stream that captured multiple people participating in the Milk Crate Challenge in a park, which was filmed on August 13th.

Clips from a second video uploaded on August 14th began to make the rounds on TikTok, Instagram, and Twitter a couple of days later and inspired other people to get in on the action, and just like that, the Milk Crate Challenge was officially born.

Is The Milk Crate Challenge Dangerous?

You don’t need to be a genius to know there’s a chance precariously balancing atop a pile of six milk crates has the potential to end poorly, and not everyone who’s attempted the Milk Crate Challenge has emerged unscathed.

According to WSB-TV, a healthcare worker in Atlanta treated two people for broken bones stemming from a milk crate mishap over the weekend, and it’s hard to imagine other people won’t end up joining their ranks as it continues to pick up steam.

As a result, anyone who attempts the Milk Crate Challenge should know it could come at a cost—but with that said, can you really put a price on clout?