‘Mindhunter’ Season 3 Reportedly May Not Happen And Fans Of The Netflix Show Are Very, Very Upset 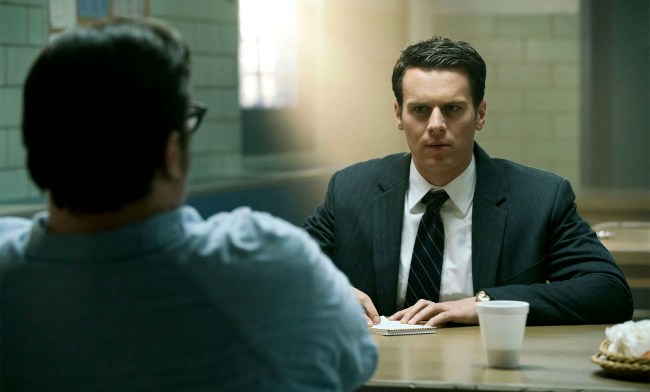 Season two of Netflix hit Mindhunter was a bit of a departure from the show’s first go-round.

Rather than spend most of the episodes featuring Holden Ford and Bill Tench interviewing serial killers like Ed Kemper, Richard Speck, Montie Rissell, and Jerry Brudos, season two spent more time delving deeply into one specific set of killings, the Atlanta child murders of 1979 to 1981.

Fans were split on which season’s storyline style they liked best, but both seasons scored incredibly well with season one scoring 97% and season two scoring 98% on Rotten Tomatoes.

Unfortunately for fans of Mindhunter, a new report makes it sound like their is a good chance they will never get to see a third season.

Last month, Netflix let the options of the cast, led by stars Holt McCallany and Jonathan Groff, lapse, further raising the possibility that we may have seen the last of Mindhunter.

That is not entirely the case, the network told Deadlinewhile confirming that the options on the cast, which includes co-star Anna Torv, have expired.

“David is focused on directing his first Netflix film Mank and on producing the second season of Love, Death and Robots,” a Netflix spokesperson said in a statement. “He may revisit Mindhunter again in the future, but in the meantime felt it wasn’t fair to the actors to hold them from seeking other work while he was exploring new work of his own.”

“He may revisit Mindhunter again in the future…”

That isn’t exactly confirmation, is it? Also, they better hope that McCallany, Groff, Torv and other stars of the show don’t move on to hugely successsful jobs on other shows while they wait.

It is unclear whether a third season of Mindhunter is feasible. According to sources, the cast love working with Fincher and most if not all would be willing to come back for another season but they may be tied to another series.

There has been chatter that Fincher was not particularly thrilled to do another lengthy location shoot (Mindhunter films in Pittsburgh) and was looking to raise the series’ production value with a bigger budget.

But I hear there has been no meaningful communication between Netflix, the director and the cast about a third season.

Needless to say, this bit of news was not received well by Mindhunter fans.

Looks to see why #Mindhunter is trending.

Sees that it’s likely to be cancelled. pic.twitter.com/uTdkjwg60H

#Mindhunter what in the name of Ed Kemper is all this noise about mindhunter S3 being on hold and cast being released from contracts.. pic.twitter.com/huHinQ0uSe

Is Netflix actually serious about this?? Pausing #Mindhunter season 3 and releasing the cast from the contracts all so Fincher can make a movie about screenwriter Herman Mankiewicz?? FFS pic.twitter.com/T05i94zmj5

Netflix: "We don't have season 3 of #Mindhunter. Might we interest you in yet another season of 13 Reasons Why?"
Me: pic.twitter.com/1aEiKlhzDc

Seeing why #Mindhunter is trending. pic.twitter.com/R3lqcbhv9u