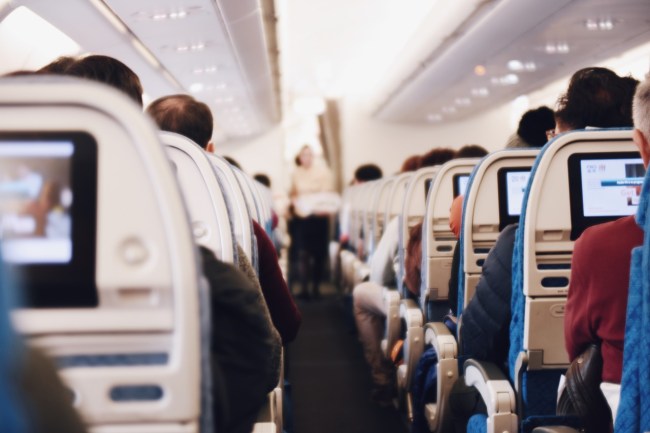 Amberley Babbage was at Chicago’s O’Hare International Airport on Thursday when she noticed an unusual passenger checking into a flight.

There was a small horse in line at the airport today and I’m so curious about it. #ORD pic.twitter.com/bwX1HEeYcH

Flirty, the 135-pound miniature horse, was permitted to travel on the American Airlines flight to Omaha, Nebraska. You know all of those rules about the size and weight of your carry-on? Apparently, they don’t mean shit because you can bring a horse on the plane and not have to check it in or pay any extra fees.

A picture taken from a Chicago to Omaha flight this past week complete with a miniature horse support animal on the plane pic.twitter.com/0haABhtRk9

Flirty even got to visit the cockpit to say hay to the pilots.

A post shared by Flirty The Mini Service Horse (@flirty.the.mini.service.horse)

During the flight, “Flirty couldn’t help jostling seat of the person in the last row of first-class every time she moved.” What do you do when a horse is kicking your seat? Apparently, having a horse on a flight bothering passengers is a-okay because “it’s just too difficult to make sure Flirty doesn’t inconvenience other passengers.”

It’s just too difficult to make sure Flirty doesn’t inconvenience other passengers. Because my airport is smaller, the planes are smaller and don’t have solid bulkheads. Flirty couldn’t help jostling seat of the person in the last row of first class every time she moved.

We've heard about the horse that walked into a bar – meet @FlirtyTheSH the miniature service horse who joined stunned passengers on an American Airlines flight. #9News pic.twitter.com/Cd3au8fAZn

The woman says she uses the mini horse as a service and emotional support animal because she is allergic to dogs and suffers from post-traumatic stress disorder (PTSD). Flirty reminds the woman to take her medication and provides support when she becomes overwhelmed.

“I don’t know what I would do without her, even if I was cured today,” the woman said of the 7-year-old horse. “She’s my constant companion.”

“We recognize the important role trained service dogs, cats and miniature horses can play in lives of those with disabilities, including, but not limited to visual impairments, deafness, seizures, and mobility impairments,” an American Airlines spokesperson said. “They are welcome in the cabin, at no charge, if they meet the requirements.”

Or you could get drunk at the airport bar like everyone else does to battle the anxiety of flying or pop a Xanax as comedian Whitney Cummings suggests.

This is no doubt incredibly stressful and distracting for the people on board, but it's also stressful for the horse. They're prey animals and are not designed to be going 500 miles through the sky. If you're too nervous to fly, take a train or Xanax. https://t.co/qtGN4Ho8hb

Comedian Nick DiPaolo made a brilliant observation about the large horse on the plane.

But every inch of my carry on bag must be completely under the seat in front of me because it could become an impediment during an emergency. Please STFU! pic.twitter.com/RMxlMEmUf1