Is It A Bad Idea To Mix Beer And Weed? 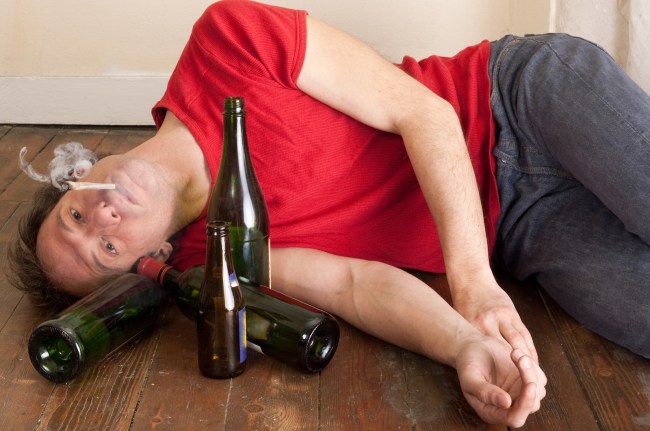 Going to a backyard barbecue or any other social gathering in this day and age and expecting just to sit there the whole time drinking a few beers is not at all realistic.

We are smack dab in a time when the drug culture has swelled into a wild ass monster with no leash.

Not only is marijuana legal in parts of the United States, but they’ve even decriminalized magic mushrooms in a couple of cities.

And go ahead and string me up right now for saying it, but it is also easier than ever before for the average citizen to get their hands on scripts for speed, pain pills and other dark and dangerous pathways to inebriation that they need to get through the day.

Why else do you think the country is in the midst of one of the worst drug epidemics in all of history?

Americans are getting loaded with rabid enthusiasm, and the weaker of the breed – we hate to say it — is probably going to end up getting sucked into a cesspool of downtrodden and drown in the treacherous waters of the pariah sea.

All we can do is wish them the best – God bless em’, and fuck em all!

This imbecilic plummeting of soul and fortune (no matter how modest) doesn’t happen to everybody – and it sure as shit doesn’t have to happen to you.

In fact, we sincerely hope that it doesn’t and you emerge from the madness of each year healthier and more successful than the one before it.

But if you think for a second this means that your beer-sippin’ ass is off the hook when the time comes to take a pull from that dab rig this summer, you’ve got another thing coming.

But a man just can’t go out there and start mixing substances without some idea of what he is getting himself into.

Hell, any of us that dabble in this kind of internal chemistry without some basis on how to do it without dropping dead should be crowned King Dipshit of Dipshit Land.

There is a fine art to partying, especially when the celebration comes complete with a cornucopia of intoxicating substances.

One of the most popular tag-team combinations that will inevitably come up in your social endeavors this year is beer and marijuana.

It doesn’t matter if you happen to be attending a freaking mixer hosted by the Jehovah’s Witness, chances are, around your third or fourth drink, a joint is going to magically appear in your hand.

That or some dude that you’ve never met before, his name will be something like Joshua or Ken, is going to pull a pot edible out of his pocket all covered in lint and say, “Here you go, brother, I’ve been saving this for such an occasion.”

The point is that you are going to encounter a situation sooner or later in which you find yourself mixing beer and weed.

The trick is to engage in this behavior and still manage to keep yourself in an upright position, and not go crawling around on the floor like a fucking tomcat with stage four leukemia.

And that’s not always easy.

Some people enjoy the high they get from combining weed and booze.

The hipsters even came up with a name for it. They call it “crossfade.”

Presumably, this is the label they conjured up one day while trying to decide whether it was more fashionable to drink craft beer or smoke craft weed.

In the end, they figured, what the hell, as long as we keep our beards properly groomed and shiny, most people will buy into the cultural jibber-jabber and not smite us for doing both.

But we don’t like to get that wrapped up in the details of anything in life, much less something that involves catching a buzz.

So, call it crossfade all you want, we like to think of it more in terms of stacking the deck in such a way that ensures we are efficiently pissed by the end of the night.

Still, we’re not going to lie and tell you that every Bro can enjoy booze and weed together without suffering some repercussions.

Science says that alcohol actually increases the absorption of THC in a person’s system and, well, sets them on course for a less than pleasant headspace.

People who are sensitive to this combination might even get nauseated and start yakking up their guts at some point in the evening.

This is something they like to call “greening out.” More hipster vernacular, we’re sure.

The only way to tell if you are susceptible to a green out is to give the combo a try.

Come on now, don’t be scared. That’s the fun part.

In all seriousness, it is essential for the up-and-coming socialite to understand that jumping on a booze train with a marijuana chaser can shake things up a little.

And since everyone is different, the reaction to these two substances getting it on simultaneously could be anywhere between good, bad and ugly.

The truth is, getting really high and then knocking back a few brews has turned more than its fair share of daredevil partiers into slobbering specimens of humankind.

They get all pale and sweaty and start gripping the walls to keep from falling down – but they always end up on their ass in the end.

Some of these folks also start to get really paranoid, too, and there are times when it can become impossible to talk them down from it.

That goes double if they’ve been combining alcohol and eating marijuana edibles.

Although there isn’t a lot of research out there on the subject of mixing these two substances, it doesn’t take a medical degree to see that sometimes shit goes south rather fast.

“Alcohol and marijuana are both depressants, which work by slowing down the central nervous system,” Dr. Constance Scharff wrote for Psychology Today. “An ingredient of marijuana is THC, which is absorbed into the blood faster when alcohol is also present. The magnified effects of using these substances together can be very unpredictable and may cause panic, anxiety, or terror for people who use both substances in the same period.”

Hardcore cannabis advocates will preach all day about how it is just best to stay away from alcohol altogether – weed is all you need, they might say. But, for most of us, that is unrealistic as well.

Listen, there is a safe way to combine these substances without getting too fucked up for your own good. All you have to do is use both beer and weed in moderation.

It’s okay to pussyfoot around with it for a while until you get a feel for how the combo is going to affect you. I’ve had a great deal of success by consuming lower doses of edibles (10mg THC) and then drinking, also in moderation, over the top of them.

And by “success,” I mean I have not been sent into a violent fit of the spins that ends with my head in a toilet and the dog looking at me funny.

I feel like the weed over beer method of consumption gives a person more control over the intensity of their buzz, as opposed to getting borderline smashed and then swallowing 30mg of THC.

Let’s just try to remember this rule: “Weed before beer, nothing to fear. Beer before grass, it’s your ass.”