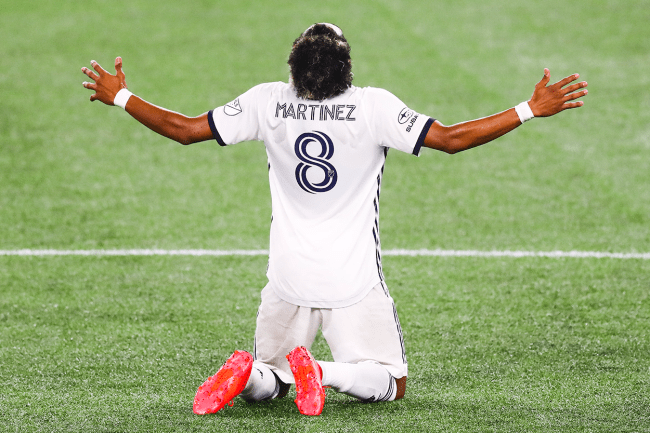 On Tuesday, Philadelphia Union midfielder José Martínez was fined an undisclosed amount by the MLS for an inappropriate gesture. On Wednesday, he repeated the same infraction.

Martínez’s initial fine stemmed from flipped some NYCFC fans the bird after there match on June 26th. The next day was much worse.

During the 74th minute of the Union’s game against the Fire, Martínez was hit with his second yellow card and sent off.

73′ Second yellow card issued to Jose Martinez. We play with 10 the remainder of the match.#CHIvPHI 1-0

On his way to the locker room, he did exactly what got him in trouble the first time— again. He looked to a Chicago fan and gave him/her/them a big ole salute with his right middle finger.

And to make it even funnier, he appeared to do the thing where you use your off-hand and pretend to look for it or pull it out. Look at the 10-second mark, you’ll know what I mean.

As soon as security got ahold of him, Martínez put his middle finger away. But then he pulled down his pants. No, seriously.

Jose Martinez appears to have flipped off (and maybe mooned??) fans as he walked off. pic.twitter.com/lkEe4OhgGW

Here’s a better look at the bizarre, anger-fueled strip show:

Martínez will likely be receiving another (much worse) fine and/or a suspension. You simply can’t be doing that. But you have to appreciate his consistency.