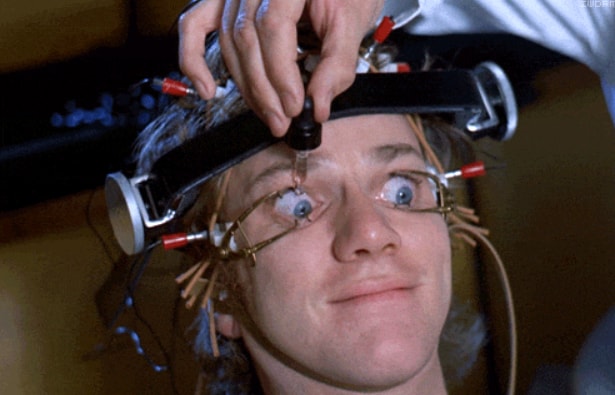 You’d think humans would be advanced enough to realize that the whatever assumed positives of tattooing your eyeball would pale in comparison to the potential life-altering and cataclysmic negatives of having your eye tattooed. Yet here we are. Talking about a model who may lose her eyeball because she tattooed her eye purple.

Catt Gallinger got her eyeball tattooed in September, yet months later she is still having many issues with her eye. Gallinger had someone color the white part of her eyeball. The procedure, which is called sclera staining, went very, very wrong.

Purple ink oozed out of her eye and trickled down her cheek and by the next day, her eye was swollen shut. Her eye became painfully infected and was having major vision problems. Three weeks later, the swelling and vision impairment remained and doctors told her she was at risk of going permanently blind. Doctors prescribed several antibiotic and steroidal eye drops to reduce the inflammation. The swelling was reduced for the most part, but her vision has yet to improve.

“There are multiple people who can attest that my aftercare was good and any other part of what I am saying,” Gallinger wrote. “I am NOT sharing this with you to cause trouble, I am sharing this to warn you to research who you get your procedures by as well as how the procedure should be properly done.”

Besides not being able to see properly, Catt is dealing with excruciating pain. “The pain sits in along my socket and in behind the eye, and it feels like something’s trying to push its way out,” she said in a Facebook video. “I woke up with less sight today. It’s blurry again, so that’s not the greatest thing. It’s super irritated. No words for the pain. None whatsoever.”

The pain is so unbearable that Catt is considering having her eye removed. “This is beyond heartbreaking. I CANNOT open it at all without significant effort,” Gallinger wrote. “Since I’ve always been honest on here, I will continue to be. My hope is gone. I’m very close to asking for removal. I’m so tired of it all.”

On Nov. 23, Gallinger was scheduled to undergo surgery without sedation, but she experienced the “worst panic attack in my life.” She skipped the surgery and is now exploring other surgery options that include being sedated.

Catt warns of the dangers of sclera staining. “I personally have not trained anyone else to do this procedure. I have appeared on various TV/news segments though, and have inspired many copycats worldwide,” she wrote. “This is important to know because without the proper education, training, experience and guidance, these practitioners have caused vision impairments like blurred vision, spots or floaters, and even blindness. YES PEOPLE ARE NOW BLIND FROM EYEBALL TATTOOING.”