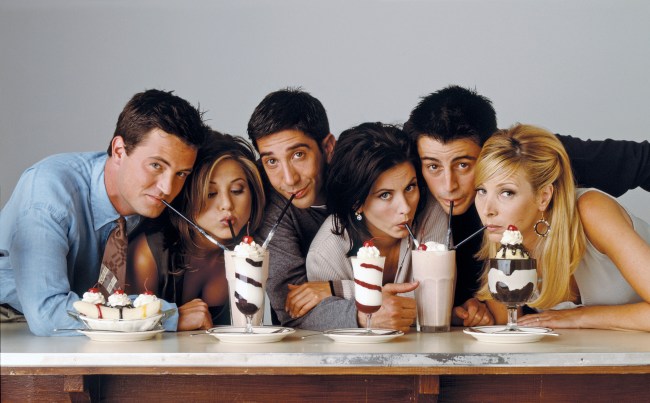 At the beginning of December, Netflix raised a lot of eyeballs by revealing that it was paying AT&T $80 million for the exclusive streaming rights to all 10 seasons of Friends in 2019, despite the sitcom’s last episode airing 14 years ago. Some media outlets are claiming that the deal could extend multiple years beyond 2019.

Friends is one of the most successful sitcoms of all-time, but to learn just how rich the show made its six star players is still mind-bending, especially when you consider that they were paid just $22,500 per episode in the first season.

In 2002 at the end of season eight, Jennifer Aniston, Courteney Cox, Lisa Kudrow, Matt LeBlanc, Matthew Perry and David Schwimmer negotiated a salary of $1 million each per episode for season nine, which at the time was the biggest deal ever made for a 30-minute television show.

Over 15 years later, the money is still pouring in.

The cast’s per episode paycheck wasn’t the only dough they were receiving from the show. After season six was over and it was back to the negotiation table, they all started receiving a portion of the show’s syndication profits.

Today, all six of them still receive 2 percent of syndication income, or $20 million each per year, since the show still brings in $1 billion annually for Warner Brothers. Plus, now that the Netflix deal is going through, Aniston, Cox, Kudrow, LeBlanc, Perry and Schwimmer can expect to see even more on their checks from Warner.

Imagine getting paid $20 million a year for work that you did 15 years ago. That’s the work of 333 working school teachers for playing make believe decades ago. I’m taking my child to Broadway directly after he exits the womb.