The Internet Has Tracked Down The First Person To Say ‘It’s Morbin Time’, Thus Unleashing The Pandora’s Box Of Memes 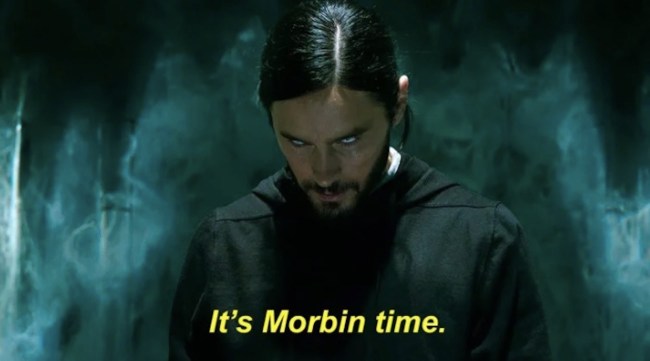 One of my favorite heady scientific theories are Sliding Doors Moments. Otherwise known as the Butterfly Effect. The idea that even the most inconsequential moments can have an incalculable impact on our lives. That accidentally spilling ketchup on your shoe in a McDonald’s is what causes you to miss that once-in-a-lifetime encounter with the woman fate decided you marry. This article is an example of the Butterfly Effect coming to life.

In case you missed it, Sony Pictures — the studio behind films such as Spider-Man: Into the Spider-Verse, Venom, and, of course, Morbius — decided to re-release the Jared Leto-starring humanoid vampire romp back in theaters due to the insane popularity of the viral memes about the film.

This, unsurprisingly, was quite an unwise decision as the film ultimately bombed for a SECOND time, making just $300,000 in its first weekend back in cinemas. The result was ultimately a positive for movie fans, though, as Sony’s misinformed decision to Renter the Morb ultimately reignited the fun of the meme.

Where did the “It’s Morbin time” meme begin?

So, here we are: two theatrical releases, hundreds of negative reviews, $163 million at the box office, and thousands of memes later. Which means there’s only one question left to ask: how did this all begin? And like always, it would appear that the internet has figured it out, as an “It’s Morbin time” tweet from November 2021 has been found, which was ultimately five months before the movie actually hit theaters on April 1 (because of course it released on April Fool’s Day).

i have horrible news: pic.twitter.com/56Q20jOq0F

I can indeed confirm that the tweet in the photo is very real as I looked it up myself:

Had the words “It’s Morbin time” never been uttered: would Sony have re-released Morbius in theaters? That, my stranger internet friends, is a Sliding Doors Moment.

just saw morbius! he does NOT say "it's morbin time" – that was a dub mistranslation. In the original Morbianese he says "let's get this party morbulating"

The biggest cultural impact yugioh has had on popular media in the pst decade was Rata’s “its morbin time” tweet pic.twitter.com/ejxYz9Gnx8

What if Morbius took the gauntlet, snapped, and said "It's Morbin time" https://t.co/Qx0AAVJha9

They’re going to make a sequel. And it’ll be totally self-aware. He WILL say “it’s Morbin time.” Is that what you want? Is it? https://t.co/y8NMbWhk42

This would be the whole theater in two years if Morbius says "It's Morbin time" in Morbius 2 pic.twitter.com/TB1R9JydML

RELATED: Sony’s Decision To Re-Release ‘Morbius’ In Theaters Has Reignited The Meme As Movie BOMBS For 2nd Time, Earning Just $300K This Weekend