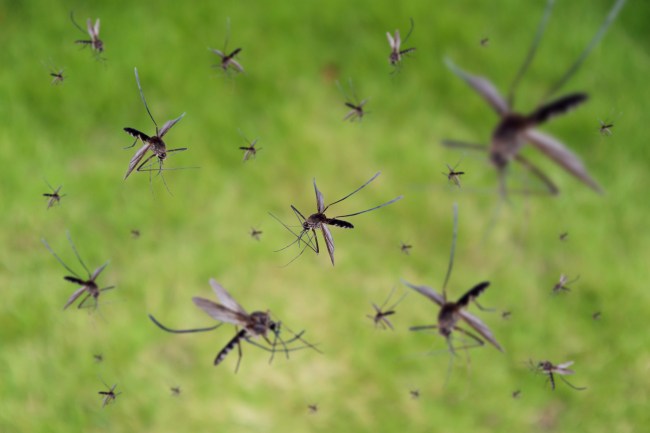 I played golf over the weekend and missed the green on a short par-3 that has a pea-sized landing area for your golf ball. I missed just to the left but assumed I could easily find my ball.

When I drove up to the green I found there was standing water in that area and when I walked over to find my ball I looked down and there were already 10+ mosquitoes latched onto my legs sucking blood. It happened instantaneously. This wasn’t all that shocking because I had a similar encounter when I played golf last weekend and two weeks before that.

The mosquitoes are relentless and they’re f’n everywhere with HUUUUGE explosions in mosquito numbers anytime we get heavy rain which is pretty much every afternoon during this time of year. I never really have cause for concern with this mosquito bites but that’s changing every year. Two years ago it was the Zika Virus scare, every summer there are reports of Dengue Fever. All of these diseases ravage the body and they’re very difficult to avoid because mosquitoes are everywhere.

The latest disease scare is one that has me a bit terrified. Several chickens tested positive for Eastern equine encephalitis virus (EEEV) in Orange County and the Florida Department of Health in Orange County (DOH-Orange) announced “the risk of transmission to humans has increased.”

One in three people infected with EEEV will die. And the other two-thirds will suffer brain damage. There’s no antibiotics treatment, they can only treat the symptoms, and this disease pops up out of nowhere days after the person has been bitten.

Based on this report from FOX News, it sounds horrifying for anyone who contracts EEEV:

Symptoms of EEE typically appear four to 10 days after a person is bitten by an infected mosquito. Severe cases of the virus “begin with the sudden onset of headache, high fever, chills, and vomiting,” per the CDC, which noted, “the illness may then progress into disorientation, seizures, and coma.”
One-third of those infected with EEEV die, while survivors typically have “mild to severe brain damage.”

“Antibiotics are not effective against viruses, and no effective anti-viral drugs have been discovered. Severe illnesses are treated by supportive therapy which may include hospitalization, respiratory support, IV fluids, and prevention of other infections,” the CDC says.

The best way to prevent EEEV and other mosquito-borne ailments is by draining standing water (like in birdbaths, in buckets or on pool covers), and covering skin clothing and using DEET-containing insect repellent when outside. (via FOX News)

I can’t walk my dog at night there in Florida without having to swat away countless mosquitoes. I suffer from that constant ‘bbbbzzzzzzzzzz’ sound as they whizz past my ears. It drives me fucking insane but it’s part of life in Florida during the Summer (and Spring + Fall) and it’s something we just learn to deal with.

They detected this disease in Orange County, Florida which encompasses the greater Orlando area. With ZIKA and Dengue Fever, it’s usually contained to South Florida in Miami and The Keys but this one’s already made its way up to the middle of the state and north of where I live which is particularly unsettling for me.

For more on this report, you can click here to visit FOX News.