The Most Expensive Thanksgiving Dinner In The Country Will Set You Back $76,000 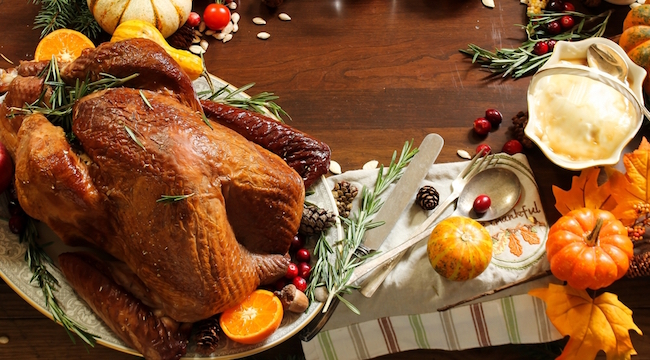 This year, millions of people will spend way too much time and money to deal with the horrors that come with traveling during Thanksgiving week, but if a bunch of farmers are to be believed, the price of the feast itself actually makes it one of the most cost-efficient meals of the year. The average Thanksgiving dinner for 10 people will collectively set you back around $50, but it’s worth noting that figure doesn’t include the amount of money you’ll probably spend on alcohol to be able to deal with some of them.

However, one restaurant in New York is doing what it can to increase the mean with a dinner exclusively designed for diners with “fuck you” money. According to Fortune, New York City’s Old Homestead Steakhouse is offering a $76,000 Thanksgiving spread seemingly designed to do whatever it can to spark a class war in America.

The menu consists a number of dishes that nobody ever asked for but which the chefs decided to make anyway, giving a giant middle finger to the 99% in the process:

It’s worth noting the dinner does come with some additional perks. Diners will receive tickets to Hamilton, a two-night stay at the Mandarin Hotel, a Fifth Avenue shopping spree, dance lessons, a Central Park carriage ride, and the pièce de résistance: a Ulysse Nardin watch with a retail value of $20,000 (if you’re looking for something a bit more reasonable, I suggest you check out some of our favorites).

This isn’t the first time Old Homestead has dreamed up a meal In addition to serving the most expensive steak in Manhattan, the restaurant also had a Super Bowl special featuring a dozen wings for the comparatively reasonable price of $4,900.

When the proletarian revolution kicks off, I know where I’m heading first.