For The 10th Straight Year, The Most Popular Car Color In The World Is White, Because We’re All Basic AF 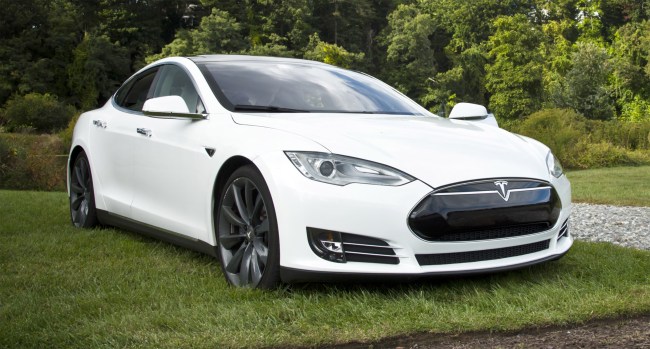 The color gray for cars actually increased 2% worldwide and is at a 10-year high. God, we suck.

For a decade now, White has been the most popular automotive color around the world. White vehicles have been holding at 38% for the past three years. Similarly, black holds steady year over year and remains a favorite in luxury and luxury SUV vehicles. Meanwhile, there is movement in other color areas as silver continues to drop, now in the single digits at 9%. Silver showed declines in major regions.

Black I can live with, but why is silver declining?

Gray is the top color in Europe for the second year in a row, especially in the Compact/Sport category where it increased by 5% up to 29% in 2020.

Although red showed a 2% decrease in North America (7%), historically it is most popular in this region. Blue, at 10% of the market, is trending on all types of vehicles, with the highest usage on compact and sport vehicles.

Axalta says all a bunch of these white vehicles are the result of pearlescent versions of the color now being widely available. 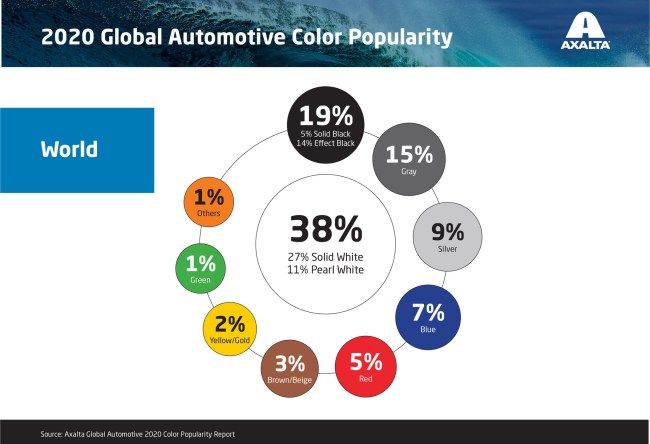 For what it’s worth, Axalta’s 2020 Global Automotive Color of the Year is Sea Glass.

I don’t know what that is either, but they describe it as a green-shade blue inspired by nature’s waterways and oceans that shimmers in the light.

Also, the only two regions of the world in which a color other than white, black, gray, silver, red, brown or blue cracked the top 7 was in Asia and where 4% of the population went with a yellow car. 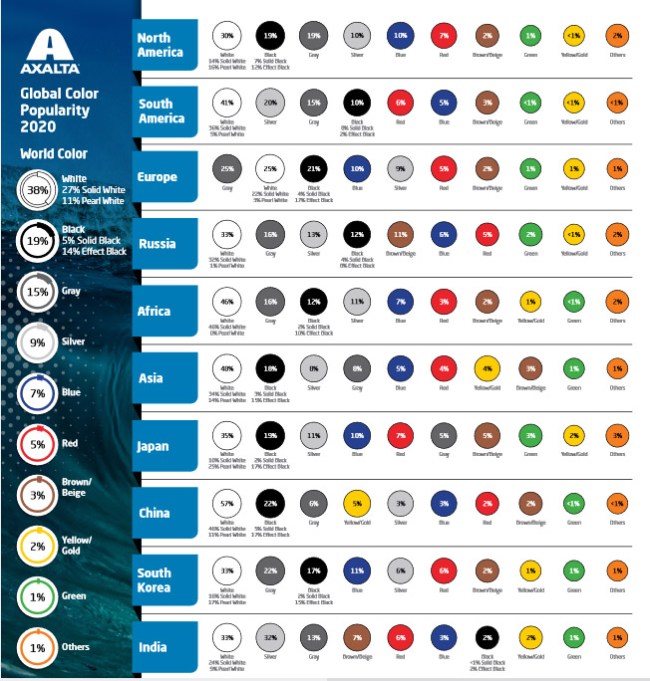 Side note: after seeing all of this data about the colors of cars I got to wondering about the old boomer myth that red cars have higher insurance costs and/or get more speeding tickets.

Turns out, at least according to the Insurance Information Institute the color of the car you drive does not affect the price of auto insurance.

AND, according to myth debunking website Snopes.com, “it does not appear that red cars get cited for speeding more often than they statistically should.”

They also state that red cars are not more likely to be stolen or involved in accidents as well.