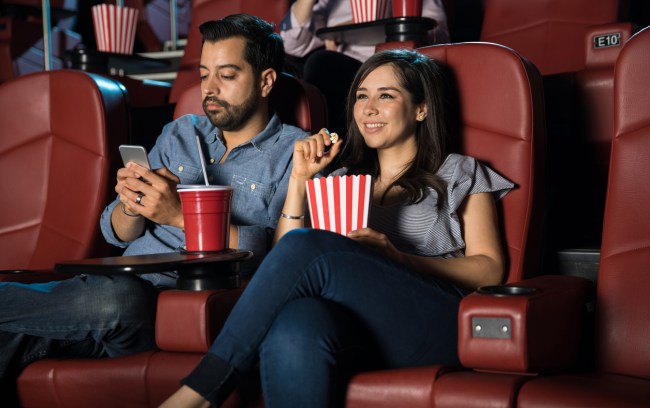 When MoviePass first burst onto the scene, it— much like many of the ads on the kind of websites you erase from your browser history— seemed too good to be true. After all, how could a company afford to let people see as many movies in a month as they want for less than the price of admission to a single one?

It appears MoviePass doesn’t really know the answer to this question, as their parent company’s stock continues to hit rock bottom and drill even further into the surface of the Earth almost every single day. As a result, the service has begun to institute new restrictions and features while treading water in an attempt to avoid permanently downing in debt.

As it currently stands, MoviePass users can only see a movie in its standard format a single time, and thanks to the recently instituted surge pricing, you now risk having to pay an extra fee if you’re seeing a popular film when tickets are in high demand. While it makes sense in theory, it seems to be working about as well in practice as a disgruntled quarterback waiting on a new contract.

According to Insider, a number of people have recently become victims of surge pricing at unexpected times. Plenty of users have hopped on social media to complain about being charged extra for seemingly no reason— including one person who got hit with a surcharge when seeing a movie even though their dad didn’t.

@MoviePass if a movie is at "peak time" or "peak pricing" why does that only apply to some people and not others? Why was I required to pay an extra fee to see the same movie that my father saw at the same time at the same theater with no additional cost? #RefundNeeded pic.twitter.com/r7Cx1CKY8G

Another guy shared a picture from inside the theater of a screening of a film that was supposedly in high demand.

Ok @MoviePass can you PLEASE explain to me why I had to pay an extra $5 for peak pricing for this movie? #moviepass #Comeon pic.twitter.com/M5OKor94DQ

“After taking into consideration demand for a title, date, or time of day is higher, subscribers may be asked to pay a small additional fee depending on the level of demand. You can avoid this peak surcharge by choosing an alternative date or film.”

Depending on how you interpret that wording, it would appear the service doesn’t care about how many people are actually in attendance but assumes movies will be popular at certain dates and times.

That sound you hear is another nail being pounded into MoviePass’ coffin.