One Of My Fondest Childhood Memories Is My Grandfather And I Cornering A Naked Mr. Rogers To Ask Him For An Autograph 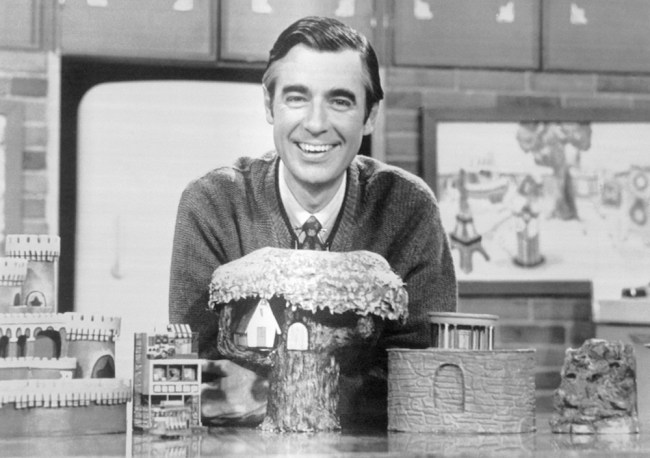 I was never a “Sesame Street” fan.

While some people loved Big Bird, Grover and Elmo, for me it was all about another PBS program: “Mr. Rogers’ Neighborhood”.

I can’t tell you what exactly it was about Mr. Rogers and his Neighborhood of Make-Believe that captivated me, but I would watch it for hours.

Being a Pittsburgh native, love for Mr. Rogers is amplified exponentially by civic pride.

Pittsburgh is where “Mr. Rogers’ Neighborhood” was filmed and where Mr. Rogers lived.

Pittsburghers are a copycat bunch. In the same way that we stereotypically paint everything black and gold, when it came to kids’ events in the 80s and 90s, if you add cardigan sweaters and connect the event to Mr. Rogers, you did it.

Concerts, museum tours, amusement parks, all of them would add a trolley or something to their programs and it would work. Every kid would be there, because either they loved Mr. Rogers, or their parents were damn well going to drag them there regardless because they also loved Mr. Rogers. It always felt like there was a real possibility that Mr. Rogers could be at any one of these events.

Joe Negri, the actor who played Handyman Negri on the show, is a jazz guitarist by trade. He regularly held jazz concerts for kids. I attended so many Handyman Negri concerts,  I thought we knew Joe Negri personally.

As a kid, what good is a Mr. Rogers themed event without Mr. Rogers? I wasn’t there to see the Lady Elaine puppet. That woman still haunts my nightmares.

After one of the events proved again to be Rogers-less, my grandfather came up with a solution. He took me, my little brother and my mom to the WQED studio where they filmed “Mr. Rogers’ Neighborhood” for a studio tour to watch the filming.

This was it! I was going to meet Mr. Rogers! Nothing could go wrong, it was a taping. He had to be there.

We walked into the studio. The set was dressed as the Neighborhood of Make-Believe, with the multi-colored cobblestone floor, King Friday’s blue castle, and the big paper mâché tree in the center of it all. Big boxy cameras on pedestals surrounded the set.

We were ushered into chairs set up on risers behind the cameras. We got to watch the last few pick up shots before wrapping from a set of risers. None of these shots featured Mr. Rogers, but as they cut on the last shot, from a distance we could see the man himself in the back of the soundstage.

Mr. Rogers was in the house. In my excitement, I craned my neck to see him and then, in a flash, he was gone.

After filming finished up, tour guides explained to us how the show was made and showed us the miniatures that made up the Neighborhood of Make-Believe. We met the inanimate cast: Daniel Tiger, King Friday, Henrietta Pussycat, and X the Owl.

Then, real people such as Mr. McFeely, the delivery man, came out to introduce themselves. Now, it was time for the star of the show to appear, it had to be. They wanted to save the best for last, I thought. The denouement was finally at hand.

I waited to hear the first couple bars of “Won’t You Be My Neighbor?” before Fred McFeely Rogers himself sprang through the curtain to greet us, but Mr. Rogers was nowhere to be found.

I was crushed. It had been a long day and with every second I thought we getting closer to the moment when Mr. Rogers would reappear, but instead we were just given the opportunity to explore and take photos on the set. What a cruel tease.

The disappointment and frustration in my face were visible. Being four years old, I didn’t get that television stars don’t live on their sets.

This was wrong – a travesty of epic proportions.

The only person more disappointed than me was my grandfather. The temerity of Mr. Rogers to not be there was too much for him. 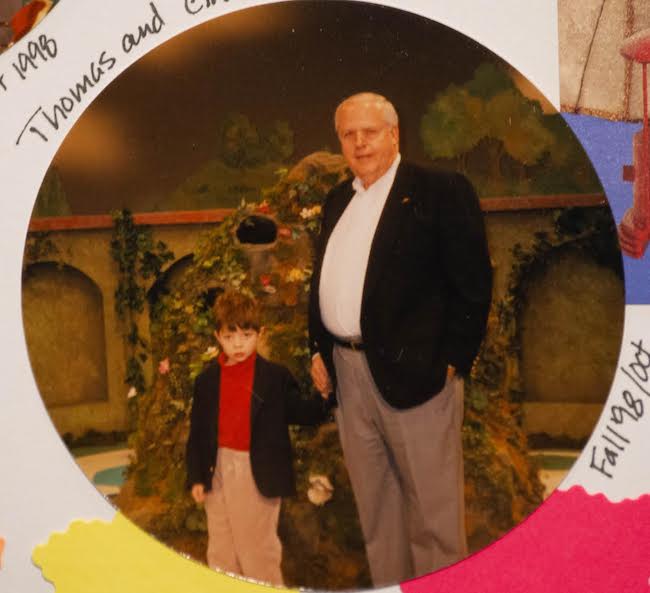 At that moment, my grandpa made it his life’s goal for me to meet Mr. Rogers. With the tenacity of a bloodthirsty wolverine, he immediately started shaking down everyone from the CEO of the station to the janitor for Mr. Rogers’ whereabouts.

When that failed, out from his blazer pocket came a bulky Motorola cell phone. Buttons were furiously mashed, calls were made, but it was fruitless, no insight, no leads. This was now personal.

If this had happened to anyone besides my grandfather, this story might have ended differently.

My grandfather was a private investigator. A fact that got me in trouble at school more than once.

People think you’re messing with them when you have a detective in your family and your last name is Holmes. When the Beatles first came to the US he was their security detail in Pittsburgh. His original idea was to hide John, Paul, George, and Ringo at his own house before the concert but he was afraid an army of screaming girls would tear up his brand new lawn.

To give you a glimpse of the man, he quit school, lied about his age, and joined the paratroops at the tail end of World War II. He was the kind of guy who would eat at the same restaurant every day for weeks on end until he got sick of it. He drove in the bus lanes in the city. He was used to getting his way and had a Clark Griswold-esque relentlessness to him. He cared deeply about his grandchildren, but would sometimes take things a little too far.

For instance, his idea to see if I understood not to talk strangers was to stage a fake kidnapping at school as a test. This idea never came to fruition because I believe my mom would have killed him. Separately, all these traits are curious eccentricities but together they created the perfect storm for hunting down Mr. Rogers.

Not meeting Mr. Rogers was the worst day of my life, until it wasn’t. Four-year-olds have a really fleeting sense of disappointment.

I loved Mr. Rogers, but to be fair, I also would have been fine meeting Kermit the Frog or the Tasmanian Devil. So, I didn’t think much about not meeting him after that day.

My grandfather on the other hand was determined for me to meet Mr. Rogers. Now, a normal person would have taken me to a meet and greet or maybe even have written a letter to Mr. Rogers telling him how much his grandson loved his show and would like to meet him, but my grandfather wasn’t going to do things the easy way. Especially after the taping fiasco, he wasn’t going to let Mr. Rogers slip away again. He was already putting his detective skills to use.

If anyone was vaguely familiar with Fred Rogers or his schedule, my grandpa would walk up to them, introducing himself as “their new best friend” socially engineering Mr. Rogers’ whereabouts and schedule. This went on for quite some time.

Make no mistake, this was a manhunt and if Mr. Rogers was in his jurisdiction—the third rock from the sun, he was going to get him.

One morning I was rousted at the crack of dawn and shuffled down into my grandpa’s car, barely awake. My grandpa told me we were going to meet Mr. Rogers, I can’t tell you that I was all that excited, because at 0 dark 30, being stuffed in the back of a Cadillac with a man whose driving and cologne are in competition for what’s worse, you mostly just think about vomiting.

Now, it was a well-known fact that Mr. Rogers was an avid swimmer and swam at a venerable and now-defunct athletic club in Pittsburgh and that’s where we were heading.

Again, a normal person might try to catch Mr. Rogers in the pool or on the way out of the club, but I guess Fred had evaded my grandfather for far too long, so instead, we lay in wait in the locker room where he couldn’t slip through my grandpa’s grasp yet again.

So, here we are in the men’s locker room waiting for public broadcasting’s champion—my grandpa, lying in wait like he’s stalking a deer (minus the deerstalker hat), doing his best undercover surveillance, and me tired, barely awake, bedhead, with sleep still in my eyes.

Finally, Mr. Rogers comes in from his swim and out jumps my grandfather from the shadows, like Elliot Ness, with me in tow. The jig is up, he’s finally got him. Now let’s just say Mr. Rogers wasn’t wearing his sweater.

Like many men of his age in athletic clubs of the time, swimsuits were optional.

This is literally the worst time to meet a fan. I mean, you don’t do this. You don’t ambush America’s conscience in a city athletic club for your grandson to meet him, it’s an unwritten rule, but rules did not apply to granddad (he told me so on many, many occasions).

There we were, my grandpa is treating the whole situation as if there was nothing weird about this at all. In his mind it’s checkmate. What’s Mr. Rogers going to do, sprint around town in a towel to evade him?

This is Grandfather Of The Year material. Mr. Rogers, being Mr. Rogers, handled the whole situation like the wonderful person he was and I got to meet him albeit, in the weirdest way possible.

One time my grandpa cornered him in a bathroom to get me an autograph. Because for some reason, the nicest man in the City of Pittsburgh, who I am so sure would be all too happy to shake a kid’s hand and say hello out on the street, needed to be cornered in restrooms and restaurants where he couldn’t get away (the PI training here was probably not helpful). 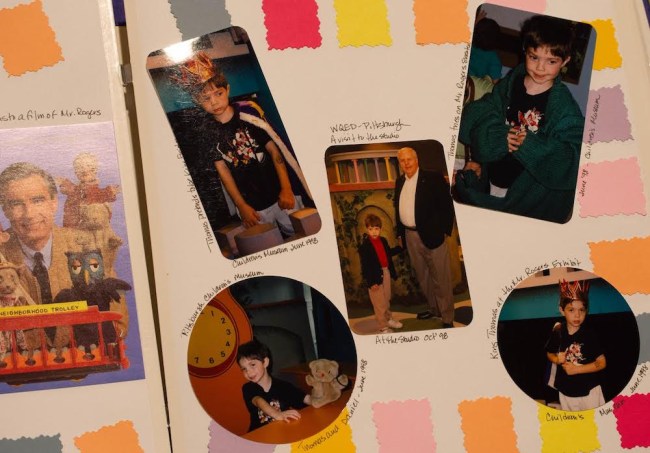 My grandfather and Mr. Rogers died at about the same time. I believe at one point they were in the same hospital. Luckily, my grandfather didn’t decide to keep up the act and chase down Mr. Rogers one last time as orderlies and nurses pursued him.

I was cleaning out my parents’ attic and my mom found a signed script from “Mr. Rogers’ Neighborhood”. I can’t tell you when we got it, though disappointingly I don’t think it’s from any of the events mentioned above.

My mom was adamant that I hang onto the script, for my grandpa. The man did devote the last few years of his life hunting down one of America’s television icons for me, so it was really the least I could do is hang on to a piece of our shared history.

Every good Fred Rogers story ends with a reminder that the man was exactly who he always presented himself to be: a kind, patient, caring individual.

I can say in good faith that’s true because any other person would have totally sought a restraining order on my grandfather, at least by the second occurrence.

Thomas Holmes is a Pittsburgh-based writer. In addition to writing embarrassing family stories, he covers hockey, movies, and music. You can follow him on instagram @thomholmes12