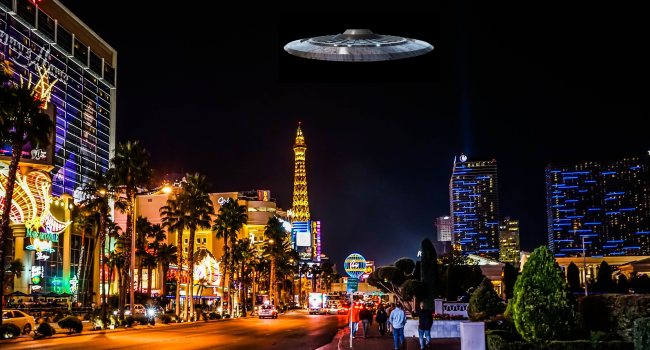 Las Vegas has always been a bit of a hot spot for UFO sightings, but over the past few weeks there has been more than the usual activity in the sky above Sin City.

Recently, a homeowner captured what they say may be a fleet of UFOs darting about in the Nevada sky.

The footage, reportedly captured on the homeowner’s doorbell camera, sped up for brevity one would assume, shows several bright objects appearing in the sky, moving very rapidly at times while staying completely still at others.

Prolific UFO hunter Scott Waring wrote about the UFO sighting on his website.

“The objects are flying really low and close the the tops of the houses,” he wrote. “Most public and military jets have rules that prevent them from flying this low, so I don’t think those are military jets.”

Waring added, “It’s also a well known fact that in Las Vegas, is Nellis USAF base. And the US military gave an allotment of land to the TALL WHITES, a species of alien that lives to be 800 years old. They were … given land behind the old firing range behind Nellis AFB. They used the land to create underground bases, where their UFOs do not inform the USAF of their comings and goings.”

Related: Pat McAfee Shares Wild Story About Seeing A UFO: ‘I Can’t Wait For People To See This’

Two days later, on March 21, another video taken in Las Vegas purports to show another UFO flying in the sky above Trump Tower.

Earlier this month, numerous people in the Las Vegas area reported seeing a group of four to eight mysterious lights in the night sky.

Reports of the lights came from eyewitnesses on different sides of the city and several of them posted videos and images of the UFOs on social media.

Can someone explain what were the 4 lights hovering above @CircaLasVegas last night? Then it disappeared. #ufosighting #lasvegas #ufo pic.twitter.com/t73KeK39Fl

Several reports have been submitted to our team since yesterday evening.

One witness stated that they believe there was a “mass behind the lights, like it was one large object and not separate aircraft.”

Another witness, who said he works with the Department of Homeland Security, claimed he has experience with military flares, both aerial and artillery launched, and he did not think these lights resembled that.

However, Nellis Air Force Base is located nearby so that is still a possibility.

Local resident Steve Barone has been capturing images and videos of UFOs in the Las Vegas area for years. He, however, claims to have no answers to people’s questions.

“I’ve never once said they’re aliens, black projects or military because I want to be really careful to not make things up. I just say what I see,” Barone said in 2016. “Whatever these things are, they are ultra-high technology.”