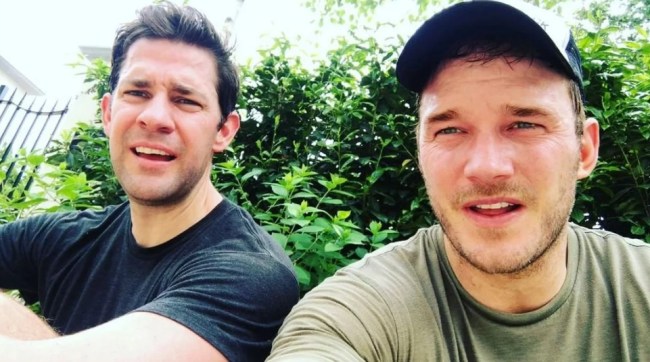 If you aren’t too busy stuffing your face full of grilled meats and shots of tequila, maybe you could take some time to reflect on the real meaning of Memorial Day. One way you can show your support to fallen veterans on Memorial Day Weekend is to do the Murph Challenge. John Krasinski and Chris Pratt have made time to do the Murph Workout, so maybe you can find the time to exercise for a tremendous cause.

The Murph Challenge is not only a workout, but it is a Memorial Day tradition and a great way to take some time from partying at the pool or beach to pay your respects to heroes who made the ultimate sacrifice.

The Murph Challenge is named after U.S. Navy SEAL LT. Michael Murphy, who was a Navy SEAL. Murphy died on June 28, 2005, at the age of 29 in Kunar Province, Afghanistan while serving his country. For his valor in battle, LT. Michael Murphy was awarded the Medal of Honor, the U.S. military’s highest decoration. Murphy was the first member of the U.S. Navy to receive the award since the Vietnam War. He was also awarded the Silver Star Medal, which was later upgraded to the Medal of Honor, and the Purple Heart.

Before he died, Murphy designed an arduous workout that many CrossFitters are familiar with.

You record the time to do all of these exercises and you should do them while wearing a 20-pound weight vest, to simulate the weight Murphy carried with his body armor.

RELATED: Veterans Give Brutally Honest And Absolutely Heartbreaking Responses After The Army Asks ‘How Has Serving Impacted You?’

John Krasinski and Chris Pratt are encouraging Americans to take on the Murph Challenge, share their times, and challenge your friends to do the workout on Memorial Day.

“On Monday, remember to stop at some point of your day, think, and say thank you to all the brave men and women who’ve laid down their lives for you,” Krasinski says in the video seen with his trainer Don Saladino. “And if you want to do something a little extra special on Monday or before then, take the Murph Challenge.”

TheMurphChallenge.com Memorial Day is coming up. No matter where you are or what you’re doing, please take a moment out of your day Monday to pause and say thank you to the brave men and women who have laid down there lives for all of us. And if you wanna do a little something more? Take the #TheMurphChallenge !! Go to themurphchallenge.com for all the info! @donsaladino @prattprattpratt @therock

Krasinski challenged Pratt and Dwayne “The Rock” Johnson to take on the Murph Challenge. Chris accepted the challenge and did the Murph Workout and acknowledged that John beat him the last time they did the challenge. “He beat me last time we did it together. Not that it’s a competition,” Pratt wrote on Instagram. “But John is actually deceptively strong. Also, not to make an excuse, but I let him win…. because I’m such a big fan of Emily.” Emily is John’s wife Emily Blunt.

“Thank you to Lt. Michael P. Murphy and the millions of soldiers who have paid the ultimate sacrifice for our freedom. We live this life because you laid down yours, gratitude and prayers for all of you,” Pratt said. “We got a big group of people doing The Murph Challenge this year to celebrate Memorial Day and to memorialize our fallen heroes especially Lieutenant Michael Murphy.”

#TheMurphChallenge is just around the corner. Me and the gang got one done yesterday. Go to themurphchallenge.com to find out what I’m talking about, get you a shirt-post a sweaty pic with your crew for a RT! Order today for guaranteed shirt delivery on time for #memorialday amd join the millions of bad asses who’ve accepted the challenge! All proceeds go to a great cause! Special thanks to @jayglazer @xcnatch @iheartmindy @kimdejesus @tyga @shawnemerriman @nateboyer37 @brock_hekking @grahambunn @robg @reallifepimp @oliverstarkk @arnoldchon @jlweddle @adelkyokushin @forgedmike @samantha_r_bonilla #jaredshaw and everyone else who made it to @unbreakableperformance to take the challenge yesterday. We’ll be doing it again on memorial day. Join us!!! Get your shirt! Participate! Also shout out to my buddies @ericchurchmusic for the use of outsiders and @patrikgiardino for shooting the video. We’ll be dropping the full video on Memorial Day. And lastly but most importantly thank you to Lt. Michael P Murphy and the millions of soldiers who have paid the ultimate sacrifice for our freedom. We live this life because you laid down yours, gratitude and prayers for all of you. ♥️👍🏼🙏🇺🇸

Pratt and Krasinski have been doing the Murph Challenge since 2017.

#memorialday #murphchallenge @johnkrasinski 1 mile 100 pull-ups 200 push-ups 300 air-squats 1 mile Do it for time. Check out the challenge and get your shirt at https://www.forged.com/ Thank you to all fallen heroes and their families. Today we remember and honor you.

You can find out more about the Murph Challenge and LT. Michael Murphy on the official website.