NASA Investigating What May Be The First Crime Committed In Space 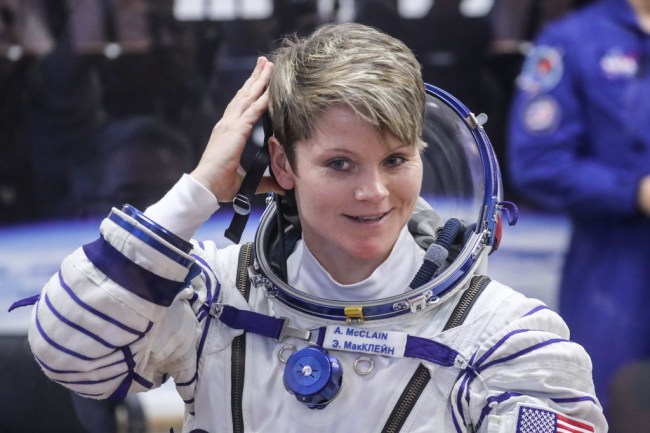 What happens in space does not stay in space. NASA is investigating claims that an astronaut may have committed the very first crime in space.

Astronaut Anne McClain used NASA computers on the International Space Station to access the bank account of her estranged spouse. The astronaut does not deny the claims, but said she did nothing wrong. Maybe President Trump was right about the need for a Space Force.

Through a lawyer, McClain told the New York Times that she was checking the bank account to make sure that there was enough money to pay bills. McClain was able to access the bank account because her former spouse never changed her password.

Her former spouse Summer Worden, a former Air Force intelligence officer who lives in Kansas, is accusing McClain of identity theft and improper access to Worden’s financial records. Worden filed a complaint with the Federal Trade Commission as well as NASA’s Office of Inspector General. There is no evidence of the bank account funds being transferred or used by McClain.

RELATED: Lunar Lander Crashed On The Moon And Unleashed Thousands Of Tardigrades, The Most Resilient Animals Known To Man

Worden and McClain got married in 2014, but Worden filed for divorce in 2018. McClain accused Worden of assault after the divorce. McClain said she wanted to ensure that there were enough funds in the bank account to properly take care of Worden’s son.

Worden gave birth to her son a year before she met the astronaut and the couple had been raising the boy together prior to the divorce. McClain claims to have a “deeply parental relationship” with the young boy, but Worden would not allow McClain to adopt him. In 2018, while the couple were still married, McClain went to court to request shared parenting rights and “the exclusive right to designate the primary residence of the child” if the parties could not reach a mutual agreement.

“She strenuously denies that she did anything improper,” said McClain’s lawyer, Rusty Hardin. McClain claims that she accessed the bank account throughout the relationship and her ex-spouse knew the entire time. McClain is now back on Earth and is said to be “totally cooperating” with NASA’s investigation.

McClain graduated from West Point military academy, then became an Army pilot who flew more than 800 combat hours in Iraq. She then became a test pilot and became a NASA astronaut in 2013. McClain spent six months aboard the ISS.

So what court would have jurisdiction over a crime committed in space? The nations that use the International Space Station are: the United States, Canada, Japan, Russia The ISS consists of Canada, Japan, the Russian Federation, and the members of the European Space Agency: Belgium, Denmark, France, Germany, Italy, The Netherlands, Norway, Spain, Sweden, Switzerland and the United Kingdom.

National law applies to the astronauts. Russians are subject to Russian laws, Americans are subject to US law. Nations can prosecute a citizen of another nation for crimes committed in space and offenders would be extradited back to Earth for a trial.

“She would have gotten away with her crime if she had a little longer to planet.”