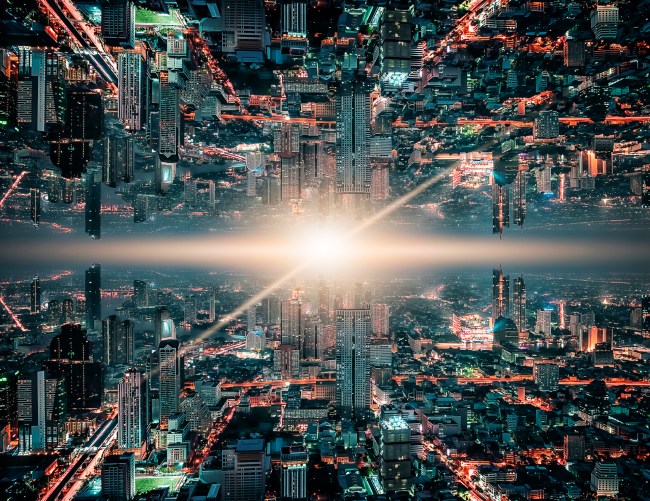 The ‘Upside Down’ is real. That’s the news. At any other time in history, the recent revelation of UFOs existing and now this would be the only thing discussed but it’s all playing second-fiddle to the only news in the world right now.

If we were still in April I’d be quick to say that NASA had gotten lazy this year with their April Fool’s Day gag. Alas, it’s May and it appears NASA researchers have found possible evidence of a parallel universe where the rules of physics are opposite to our own.

I won’t for a second try to claim I fully understand the implications of this discovery and/or the underlying Physics. I’m not even sure my AP Physics teacher back in H.S. who used to design rockets before becoming a teacher would be able to grasp the far-reaching implications of this but the story is wild.

The concept of a parallel universe has been around since the early 1960s, mostly in the minds of fans of sci-fi TV shows and comics, but now a cosmic ray detection experiment has found particles that could be from a parallel realm that also was born in the Big Bang, the Daily Star reported.
The experts used a giant balloon to carry NASA’s Antarctic Impulsive Transient Antenna, or ANITA, high above Antarctica, where the frigid, dry air provided the perfect environment with little to no radio noise to distort its findings.

A constant “wind” of high-energy particles constantly arrives on Earth from outer space.

Low-energy, subatomic neutrinos with a mass close to zero can pass completely through Earth, but higher-energy objects are stopped by the solid matter of our planet, according to the report.
That means the high-energy particles can only be detected coming “down” from space, but the team’s ANITA detected heavier particles, so-called tau neutrinos, which come “up” out of the Earth.
The finding implies that these particles are actually traveling backward in time, suggesting evidence of a parallel universe, according to the Daily Star. (via NYPost)

Cool. Aliens last month and now we’ve got a parallel universe to keep us occupied for a while. If this parallel universe exists, are we the backward ones to the people living there? Is this like the Ketchup vs. Mustard on a HotDog argument where people (myself included) who enjoy ketchup on a hotdog think you all are the weird ones for not enjoying something?

Since I need some experts to break this news down for me, here’s some more from the report over on the NYpost:

Principal ANITA investigator Peter Gorham, an experimental particle physicist at the University of Hawaii, suggested that the only way the tau neutrino could behave that way is if it changed into a different type of particle before passing through the Earth and then back again.
Gorham, lead author on a Cornell University paper describing the odd phenomenon, noted that he and his fellow researchers had seen several of these “impossible events,” which some were skeptical about.
The simplest explanation for the phenomenon is that at the moment of the Big Bang 13.8 billion years ago, two universes were formed — ours and one that from our perspective is running in reverse with time going backward. (via NYPost)

So we’ve got particles traveling back in time, on our planet, defying our laws of physics and this is actual evidence that a possible parallel universe might exist and the only people talking about it are making jokes on Twitter right now?!

why is no one talking about NASA detecting a parallel universe next to ours where time runs backwards??

aight y’all i’m going to the parallel universe, dm me if you want something pic.twitter.com/MgTPsQcrPX

Fuck the corona virus, NASA just detected a parallel universe where the law of physics is the opposite of ours, I’ve never been more intrigued

so nasa just discovered evidence of a parallel universe ……………………. brb while i go scream

So much already happened this 2020

May 2020: Hold my PARALLEL UNIVERSEhttps://t.co/tOqeIzlXMc

2020 has been wild. Not even mid year and there's a pandemic, confirmed(ish) UFO sightings and a parallel universe plus some really confusing stuff with the government. Are we in a scifi show? I can't keep up..

If we make it to 2021 there’s seriously going to be no news left. Everything is happening this year and it’s all happening at the same time.