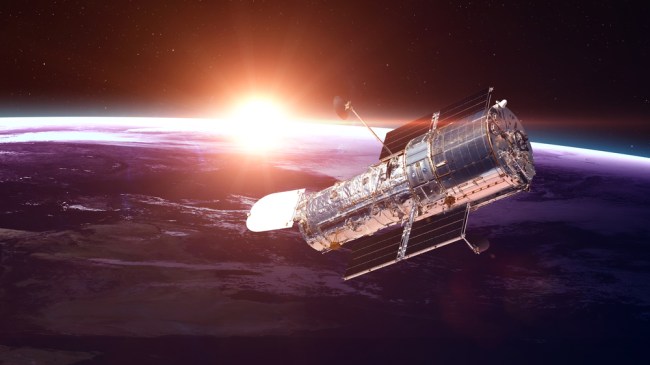 What did you achieve this week? Successfully snort a condom? Manage to get to work less than your usual 15 minutes late? Remember to bring a bottle of water with you to bed after drinking all day so to not wake up in the middle of the night and have your mouth as dry as the Sahara? While those all sound like admirable accomplishments, you’ve got to raise your game a bit to compete with what these incredible astronomers recently achieved. NASA’s Hubble space telescope spotted the farthest star ever seen and it was far. Really, really, really far away.

Thanks to gravity and fortunate timing, researchers were able to spot the most distant star ever observed. The star is a mind-melting 9 billion light-years from Earth in a galaxy far, far away, making it the most distant “ordinary” star ever seen. So that means that the light from the star started traveling at least 9 billion years ago. Want to warp your mind even more? The universe is approximately 13.8 billion-years-old, meaning that the star’s light came from when the universe was about 30% of its current age, about 4.4 billion years after the Big Bang.

More than halfway across the universe, an enormous blue star nicknamed Icarus is the farthest individual star ever seen. Using gravitational lensing, Hubble was able to pinpoint this faraway star and set a new distance record: https://t.co/eylSuu296c pic.twitter.com/DxbV3YCQNr

In two new papers published in Nature Astronomy this week, researchers divulged their discoveries. “This is the first time we’re seeing a magnified, individual star,” astronomer and lead author Patrick Kelly said in a statement. “You can see individual galaxies out there, but this star is at least 100 times farther away than the next individual star we can study, except for supernova explosions.”

The space observatory discovered the star in an extremely distant spiral galaxy. Scientists named the star MACS J1149+2223 Lensed Star 1. But nobody is remembering that cluster of letters and numbers, so they also gave it a much more memorable nickname of Icarus, named after the Greek mythological character who flew too near the Sun on wings of feathers and wax that melted.

Scientists were only able to see Icarus because it was being magnified by the gravity of a massive galaxy cluster, located about 5 billion light-years from Earth. This phenomenon is called “gravitational lensing” and caused the MACS J1149+2223 Lensed Star 1 to be 2,000 times its true brightness, making it visible to Hubble. Gravitational lensing means that galaxies can act like a natural lens in space which bends and amplifies light. Usually, this phenomenon only magnifies objects by up to 50 times, but scientists lucked out with Icarus.

“For the first time ever, we’re seeing an individual normal star — not a supernova, not a gamma-ray burst, but a single stable star — at a distance of nine billion light-years,” said study co-author Alex Filippenko, an astronomer at UC Berkeley. “These lenses are amazing cosmic telescopes.”

“There are alignments like this all over the place as background stars or stars in lensing galaxies move around, offering the possibility of studying very distant stars dating from the early universe, just as we have been using gravitational lensing to study distant galaxies,” Filippenko said. “For this type of research, nature has provided us with a larger telescope than we can possibly build.”

Researchers believe that Icarus is most likely a blue supergiant, which is much larger, hotter, and brighter than our Sun. Space is metal.