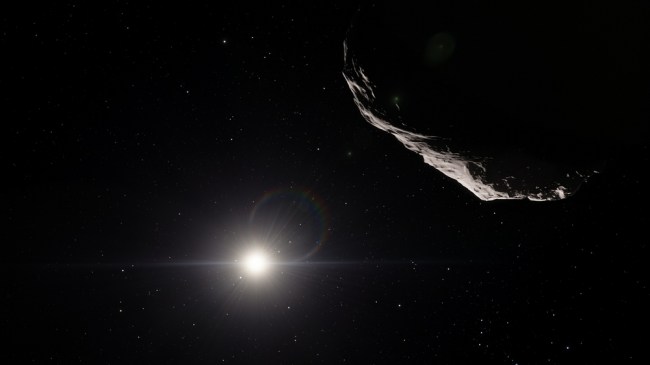 NASA is keeping a watchful eye on an asteroid named 2002 AJ129, which the space agency is calling a “potentially hazardous” object. The asteroid hurtling towards Earth is said to be the size of the Burj Khalifa in Dubai, which is the world’s tallest skyscraper. You shouldn’t get too worried because when 2002 AJ129 passes by Earth next month it will come within 2.5 million miles of our planet, which is 11 times the distance between Earth and the moon.

In cosmic terms, 2002 AJ129 will come close to Earth on February 4th. The asteroid is classified as a potentially hazardous object (PHO), which Wikipedia describes as a “near-Earth asteroid or comet with an orbit such that it has the potential to make close approaches to the Earth and is of a size large enough to cause significant regional damage in the event of impact.”

The asteroid is 0.7 miles wide and careening through space at 67,000 mph. If an asteroid the size of AJ129 was to smash into the planet, it could propel Earth into a mini Ice Age. The impact could send debris into the atmosphere and the soot would cause temperatures to plummet up to 45 degrees according to Charles Bardeen of the National Centre for Atmospheric Research. But thankfully, we won’t have to worry about that doomsday scenario in two weeks when the asteroid soars past Earth. Probably. There was a meteorite that disintegrated over Michigan this week. The explosion of the one-ton meteorite caused a shockwave that registered a magnitude 2.0.

This is the video of a meteorite seen in the sky over Southern Michigan. pic.twitter.com/dSytJ2lJP4

The flash of light that lit the night sky in Michigan on Tuesday is likely a meteor, the National Weather Service says https://t.co/097sAJl5zJ pic.twitter.com/PMwpSz6GbC