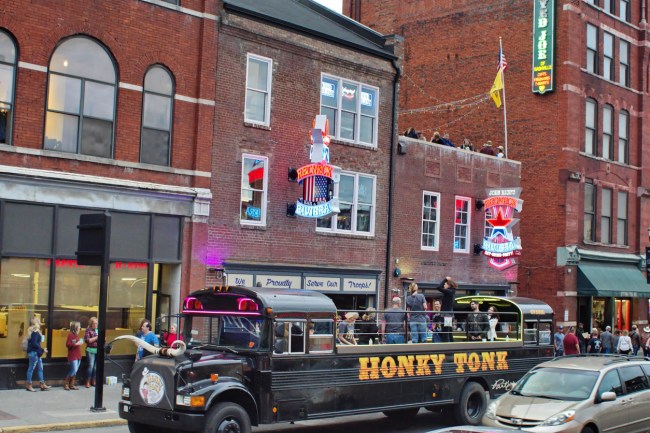 If you haven’t been to or live in Music City, let me give you some back story. While you might be familiar with the ever-popular pedal taverns, Tennessee’s capitol city takes it to another level.

Countless different party vehicles drive the streets from dusk until dawn every day of the week. They flood the streets from Thursday to Sunday. Vehicles range from open-roofed school buses, to tractor pulls, to pickup trucks, to hot tub trailers. Here is a video for reference:

Catering primarily to tourists, the buses are filled with bachelor/bachelorette parties and out-of-towners. These are the same people who drive into Nashville on Thursday morning, drink on Broadway and leave hungover after lunch on Sunday.

Many of them cannot handle the party (I’m looking at you, Michigan) and get lost in the sauce far earlier than considered appropriate in most social settings. The good news is that socially appropriate behavior carries a looser definition on weekends in the South. With that being said, that doesn’t mean that there isn’t a line. This guy (allegedly) crossed it.

See the man, riding in the bed of a stretch pickup party truck, having a day. All is well and good until he decides to toss his drink to a SUV that pulls up alongside the bus. Moments later, the can comes rocketing back and hits him directly in the face. Headshot.

The driver of the truck/bus gets out to assess the situation and picks up the drunk guy’s sunglasses. Notice his sweet mullet.

I can’t believe I caught this on video 👀😳 #fyp #nashville

We don’t have any idea of what was said between the two parties. Fortunately, we got the backstory.

Taylor says in her follow-up video that both the bus driver (Caleb) and the guys in the SUV reached out to her. Per their stories, the drunk guy on the party bus was in the wrong. Shocker!

Apparently, he tossed an open White Claw into the window of the SUV. It landed in the lap of an unsuspecting passenger. The guy in the SUV was not pleased with the unwelcome drenching and threw the White Claw back at the drunk dude. It just so happened to nail him in the face.

Taylor said that even the guy’s friends on the bus were glad he got tossed. While there may not be laws while drinking Claws, you can still go viral for getting thwacked in the face by your own drink. Tough scene for the drunk guy.