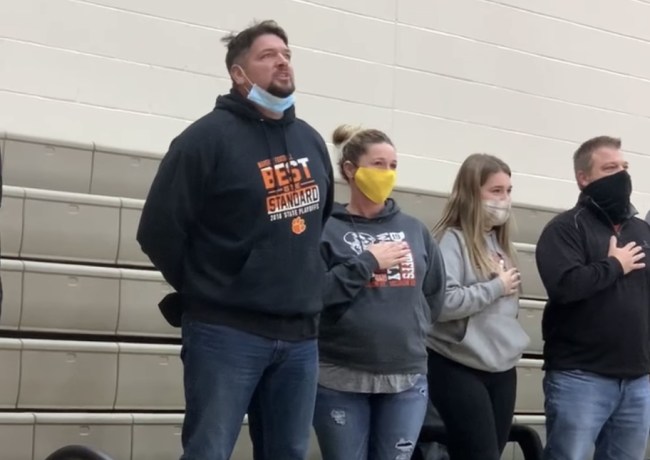 Prior to an Ohio basketball game between Waverly High School and Portsmouth West High School last week, fans were asked to stand for the national anthem. However, nothing played through the speakers and no one was able to figure out how to get the anthem to play.

When Trenton Brown, the father of one of Waverly’s athletes, saw that the sounds system was failing, he took matters into his own hands. When he noticed that the announcer was getting frustrated trying to figure out how to make the speakers work, his wife encouraged him to fill the awkward silence.

So sing he did. Brown pulled down his mask and belted out the Star Spangled Banner with full voice. And honestly, it was pretty good, all things considered.

Of course, he was met with a positive reaction throughout the gym and the team was particularly fired up. His son Ezekiel was likely horrified when his father began to sing, but after he crushed it, there is no way to be embarrassed. In fact, according to one parent, he had people in dire need of a tissue.

“He brought about everyone in the gym to tears when he saved the day by standing up in the crowd and signing the anthem,” she said.

Moving forward, Waverly should ditch the recording and let Brown do his thing prior to games. And while his performance was one thing, the highlight of the video comes immediately after he finishes the word “brave.” As if he wasn’t receiving roaring applause, as if he hadn’t just sung the national anthem in the spur of the moment, without acknowledging the moment, he sat down, picked up his popcorn and ate took a big ole handful out of the bag. Legend.