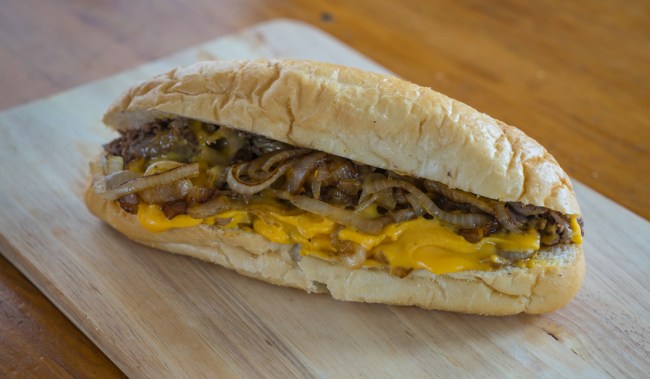 Cultural appropriation is a particularly hot-button topic these days, but while everyone is freaking out about white people getting cornrows while on vacation in Bermuda or wearing headdresses at Coachella, there’s another issue that’s gone majorly overlooked: culinary appropriation.

Virtually every locale in the world has at least one signature food that’s inseparable from their culture, whether we’re talking about Buffalo’s love of wings, Quebec’s affinity for poutine, and the various regions who swear they’re the home of the only good BBQ in the world. Unfortunately, many of these dishes have become abused by restaurant menus that boast bastardized versions of dishes they brand as “authentic”— but I don’t think anything has been disrespected more than the Philly cheesesteak.

If you’ve never been formally initiated into the cult of the Philly cheesesteak, here’s a brief primer: the sandwich is made with thinly sliced ribeye, slathered with Cheez Wiz (or— if you’re feeling fancy—provolone), and topped with some roasted onions if you’re in the mood. While I don’t have anything against throwing mushrooms or peppers on one, doing so simply makes it a “cheesesteak” or a “steak and cheese.”

Mixing up the terminology is a simple (and largely harmless) mistake to make if you’re not in the know, and while I’m never going to actually go after anyone for using the wrong moniker, I have to make an exception for a tweet that was posted by the National Park Foundation over the weekend.

I have no idea what the hell a “cheese sandwich” is supposed to be and neither did a bunch of people who hopped into their mentions to drag them for calling it that (with many of them using some highly appropriate GIFs).

I still remember the first time my daddy picked me up and gave me my first cheese sandwich. He looked at me square in the eye and said. "Now you're a man son. Now. I am proud to call you son."

You’d think they would have learned something from ESPN.