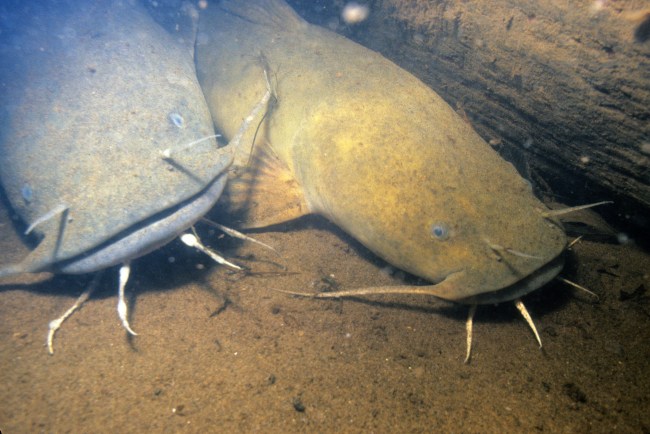 For 32 years, the Nebraska state fishing record for Flathead Catfish has stood at 80-pounds ever since angler William Swanson landed that fish on Loup Power Canal back on June 14, 1988. That record was demolished this month when an angler weighed an 89-pound Flathead Catfish and what might be the most amazing aspect of this record-breaking catch is he was able to keep the fish alive for days before successfully releasing it back into the wild.

It took Richard Hagen 45-minutes to reel in the 89-pound catfish from the Missouri River. He caught this behemoth using a Bluegill fish as live bait. It wouldn’t be uncommon for a fisherman to toss a record-breaking fish like this on ice and take it to a certified scale but as Pete Thomas points out on For The Win, this angler went to extreme lengths to keep this fish alive.

First, he searched around to find an aquarium large enough to temporarily house the fish but he wasn’t able to find such a home. He then stored the 89-pound fish alive using a large deep freezer for several days before releasing it back into the river.

Hagen weighed the fish at home where tipped the scales at 88-pounds and then took it to a certified scale where the Flathead Catfish weighed a record 89-pounds, a whopping 9-pounds more than the existing record which stood for over three decades.

He kept the large deep freezer full of water in back of his truck as he waited for the Nebraska Game and Parks Commission to inspect his catch and certify it for the record books and the fish spent over two days alive in its temporary home before it was released back into the wild.

As for why he chose to release the fish, here’s what he told the York News-Times:

He returned it to the water two days after fighting nearly 45 minutes to land what will be a state record fish.
“He got me wet when he took off,’’ Hagen said. “I said goodbye and lead a happy life.’’
It was the best ending anyone could have hoped for, says Daryl Bauer, the fisheries outreach program manager for Nebraska Game and Parks Commission.
He’s still waiting to receive the paperwork, so he can certify it as the official record. It tops an 80-pounder taken out of the Loup Power Canal by Willam Swanson on June 14, 1988.
“That fuels everyone’s imagination,’’ Bauer said of the fish’s release. “There’s a state record flathead catfish swimming around in there.’’

He has pictures, a weight, and measurements of the fish. He can easily get a mounted replica made of his new state record and all without having to kill the fish. That’s a pretty cool way to drive interest in fishing that area in the future.