Netflix, ‘Black Mirror’ Reveal Stats On Some Of The ‘Bandersnatch’ Choices We’ve Made 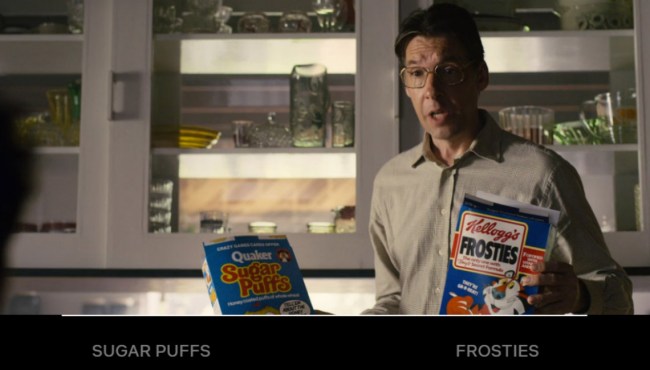 Netflix and Black Mirror have revealed a few stats on a some of the choices viewers have made while watching the choose-your-own-adventure movie Bandersnatch.

Oops, I guess I shouldn’t call it a choose-your-own-adventure movie since Netflix is being sued by the publisher of those books for $25 million.

Anyway, if you watched Bandersnatch, and, umm, picked your own path (yeah, that works), then you may be curious to know if the choices you made were in the majority, or if you are some kind of aberrant monster.

For instance, did you have Stefan start out his day with a power breakfast of Frosties? Or did you make him suffer through a bowl of Sugar Puffs?

According to the folks at Black Mirror, over 60 percent of us chose correctly and had Stefan chow down some Frosties.

On the biggest day of Stefan's life, over 60% of his friends from the future fed him Frosties.

Confirming this majority was Netflix CEO Reed Hastings, who revealed in the company’s fourth-quarter earnings video that 73 percent of viewers chose Frosties for Stefan.

Then, with the door cracked open by Black Mirror, other related Twitter accounts joined in on the fun.

Netflix UK & Ireland provided a “very British update” about whether or not their viewers were more or less likely to have Stefan throw his tea.

Here with your very British update. Compared to the rest of the world, Brits were *less* likely to waste a good cup of tea (obviously).

Of course, Brits were less likely to ruin a perfectly good cuppa.

Netflix US then followed up with a tweet of their own revealing the numbers on how many viewers chose to have Stefan accept the job at Tuckersoft.

We just wanted Stefan to live his best life!!!

That's why 73% chose to ACCEPT the job at Tuckersoft.

How were we supposed to know indeed?

As for which of the main endings was chosen the least, take a wild guess.

Turns out that of the five main endings, having young Stefan go on the train with his mum was the path people followed the least.

How one path ends is immaterial.
It's how our decisions along that path affect the whole that matters.https://t.co/FQ0Lea1FWB

Now then… WHEN IS SEASON FIVE COMING OUT?