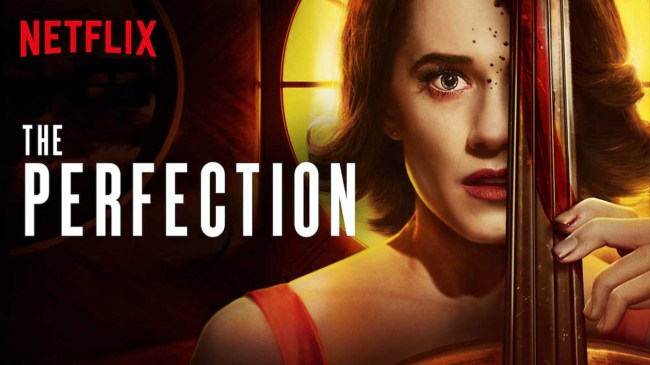 A horror movie is supposed to have you on the edge of your seat, cowering in fear of the next jump cut, perhaps grossed out by some blood and gore, and maybe even make your palms sweat, but I am pretty sure watching a horror movie isn’t supposed to actually make you physicially sick.

Which is exactly what is happening to many viewers of Netflix’s newest horror movie The Perfection starring Allison Williams and Logan Browning.

“When troubled musical prodigy Charlotte seeks out Elizabeth, the new star pupil of her former school, the encounter sends both musicians down a sinister path with shocking consequences.”

Apparently one of those shocking consequences is the viewer may suffer side effects such as nausea, migraines, and vomiting, according to several folks on social media.

Who would believe that watching things like projectile vomiting, bugs crawling under someone’s skin, and bouts of diarrhea would make people nauseous?

That being said, many of the people who said they were made sick by The Perfection, would still recommend others watch it. I guess it’s kind of like when you smell something really bad your automatic reaction is to tell whoever is in the room with you, “Hey, you gotta smell this, it’s sooo bad.”

i actually feel physically sick after watching the perfection, i couldnt take the bugs man, i was about to turn the movie off but im glad i didnt, the ending was good

THE PERFECTION is revolting, twisted, grisly, and lurid & features outstanding performances from Logan Browning and Allison Williams. I cringed so much that I fear I may be in a permanent state of cringe, but I loved every fucked up minute of it.

The Perfection fucked with my spirit. I haven’t been okay since Sunday night. It’s going in the “only watched once and don’t ever need to watch again” category for me. It’s sitting right next to Hereditary and they’re holding hands. pic.twitter.com/TCGgpcG4l3

Just watched The Perfection on Netflix and felt sick pretty much the whole way through. Gory and disgusting 😂

Just watched The Perfection on Netflix and I’m trying to understand what the actual fuck I’ve just put myself through pic.twitter.com/t6xdwCC6eC

i havent seen the whole thing but i watched some scenes from the perfection on netflix and it is literally making me feel sick so. definitely not watching it

Watch ‘The Perfection’ on Netflix if you want to be sick 🤮

Don’t say you haven’t been warned.