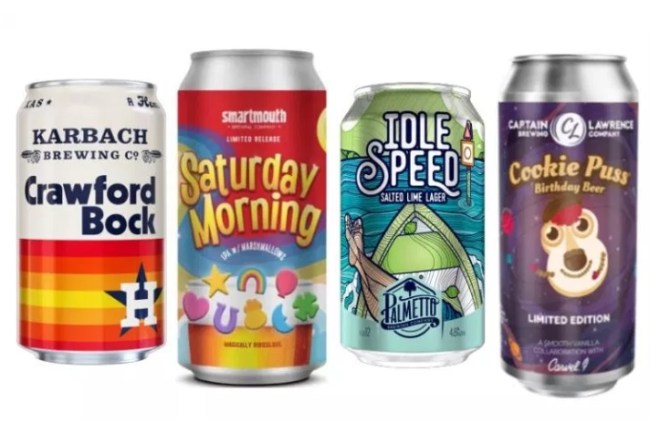 Are you ready for some tasty and unique new brews to experience in March? You’re in luck because we have some tremendous beers for you to sample in the new beer releases for the month of March of 2019. Everything from baseball-inspired beers to Lucky Charms-themed brewskis to ales taking flavor notes from Carvel ice cream. Let’s dig into the best beers of the month.

The baseball season kicks off this week! That means spring is officially upon us! What better way to defrost from winter’s icy grip than to watch your favorite MLB team while sipping on a delectable brew. Several breweries have teamed up with their local MLB team to introduce some fantastic beers.

Batting leadoff is the Crawford Bock that is as crisp as a José Altuve frozen rope. Two places make exceptional bock beers — Germany and Texas. This tremendously underrated beer is created by the Houston-based Karbach Brewing Company. The best part about this deliciously smooth 4.5% ABV malty beer with an IBU of 15 is that a portion of sales from every Crawford Bock benefit the Astros Foundation and its community initiatives, which include youth baseball, military support, childhood cancer awareness and efforts to reduce homelessness. Not to mention that the can is dressed up in those classic Houston Astros uniforms.

Next up to bat is Earned Run Ale or ERA, get it? This golden pale ale comes to us from Devils Backbone from Lexington, Virgina, who represent the Washington Nationals. Their Session Pale Ale flaunts juicy, bright flavors from citrusy Amarillo, Citra, and Centennial hops.

Everything looks better in pinstripes, even beer cans. For the 27-time World Championship New York Yankees, their beer needed to be a winner. That’s why they turned to Patchogue craft brewer Blue Point Brewery. Their Pinstripe Pils don’t only have a handsome can, but the beer inside is equally as enchanting. This crisp, clean Pilsner malt with a hint of lime lets the Motueka hops shine. Perfect for a hot day at the ballpark.

Do you like ice cream? Do you like beer? Then you are in for a treat. Carvel teamed up with Captain Lawrence Brewery to bring ice cream cake to beer. There is the Cookie Puss Milkshake IPA is brewed with Carvel’s vanilla ice cream. You wouldn’t think that an IPA would be the choice for an ice cream flavored beer, but it works. It’s not overly sweet and it isn’t too bitter. Then there is the Cookie O’Puss Pastry Stout, which is actually brewed with Carvel’s signature chocolate crunchies. This is a sweeter, full-bodied brew.

Sticking with your sweet, priceless childhood memories, do you remember drinking the milk from your favorite breakfast cereal that was sweetened by those colorful marshmallows? What if that whimsical mixture got you drunk? Smartmouth Brewing Company plays on your love of nostalgia to bring you the flavors of your childhood cereal, but as a 6.6% ABV beer. Introducing Saturday Morning, a 22 IBU IPA brewed from toasted marshmallows and bulk dehydrated-marshmallow-bits. Magically delicious. Add some Galaxy and Calypso hops and you have an adult beverage perfect for your inner 7-year-old.

The best part of waking up, is Cowboy Breakfast in your cup. Get a quick start to your day with Prairie Artisanal Ales‘ Imperial stout aged in bourbon barrels with cacao nibs, vanilla and maple syrup that unleashes a 14% ABV.

Do you love hops? Today is your lucky day because Two Brothers (a brewery actually from two brothers — Jim and Jason Ebel) has got you covered on the hops with their New England-style IPA. There is no shortage of hops or flavor with the Two Brothers Love of Hops beer. With the hoppy bitterness, you’ll also get a refreshing blend of citrus and tropical fruits to balance it out.

SweetWater Brewing Company in Atlanta boasts a cannabis-themed brew that is made from the 420 Strain, “an American Wheat packed with herbal, juicy mango notes and a distinctive dank nose.” This 5% ABV, 30 IBU beer features “terpenes and natural hemp-type flavors complement the hop and malt bill, delivering a euphoric ale with that fresh olfactory bonus rip.”

You’re all familiar with Dogfish and their glorious 120 Minute IPA. Now you can get Rye Barrel-Aged 120 Minute IPA. This India Pale Ale is aged in rye barrels for six months, and then dry-hopped it for a few more weeks for “optimum hop goodness.” Take it easy with these beauties because it packs a potent 18% ABV.

Palmetto Brewery from South Carolina understands that you need to balance sweet, tart and salty; and they do just that with their new Idle Speed Salted Lime Lager. This 4.8% ABV session beer provides a refreshing balance of sweet and tart lime with a pinch of salt to make your taste buds happy.

Oregon City Brewing Co. presents their 2019 “Coming To Fruition” beers, a selection of sour fruit beers that are aged in French oak barrels for one year. Choose from four bright, happy flavors: apricot, blackberry, plum, and raspberry. OCBC won a bronze medal at the 2018 Great American Beer Festival for their cherry sour, so they know fruity sour beers.

Who wouldn’t want the silky sweetness of honey with the crispness of a Hefeweizen? Introducing Hellgate Honey Hefeweizen from KettleHouse Brewing Co. out of Bonner, Montana. Refresh in a “blend of pale and Munich malts, white and red wheat, red wheat flakes and finished with Montana made honey from Arlee Apiaries.” The floral sweetness of the honey compliments the creamy wheat flavor nicely.

Samuel Adams‘ latest offering is their 5.5% ABV New England Pale Ale. This hazy pale malt blend has a hoppy 30 IBU, but counters the bitterness with a kick of tropical juice featuring plenty of mango sweetness.

We get another coffee Imperial stout, this time from a collaboration between The Bruery from Placentia, California and Chicago-based coffee purveyor Tugboat Coffee. This 11% ABV is called Icky Thump, a name that will surely have Jack White fans excited.