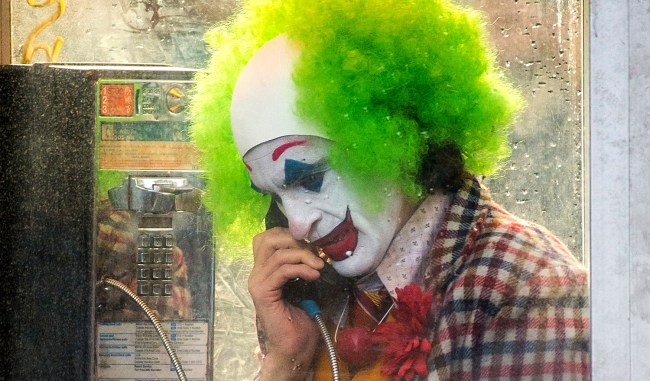 New footage and pics from the filming of the upcoming Joker movie shows the film’s star Joaquin Phoenix in some kind of action scene, in full makeup, down in a Brooklyn subway.

Phoenix was spotted running to the subway in costume as the Joker, with several other actors wearing clown masks waiting for his arrival. One of the clown actors was holding a sign with “Kill the Rich” written on it.

The next day of shooting saw Phoenix, still in full Joker regalia, exiting the subway, casually strolling out and smoking a cigarette as numerous police officers charged into the station, apparently oblivious TO THE CLOWN LEAVING THE SCENE because… well, that’s probably the 18th most bizarre thing the Gotham police have seen that day.

As I said in the headline, I am not hating this version of the Joker so far. It’s almost like a mashup of Heath Ledger, Cesar Romero and Jack Nicholson’s version of Mr. J, with almost no sign of Jared Leto (a plus).

So what do you think? Are you down with this latest take on The Clown Prince of Crime?

Jokercenters around the iconic arch nemesis and is an original, standalone story not seen before on the big screen. Todd Phillips’ (Old School, The Hangover) exploration of Arthur Fleck (Joaquin Phoenix), a man disregarded by society, is not only a gritty character study, but also a broader cautionary tale.