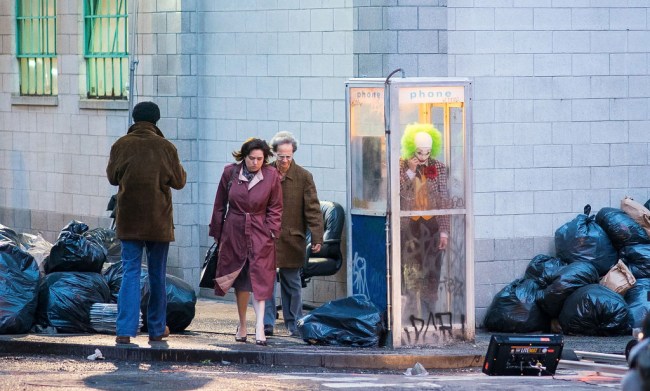 I know, I know. Every time we get excited about a comic book-based movie that isn’t produced by Marvel Studios (Wonder Woman notwithstanding) we’re always disappointed. (See: Suicide Squad, Venom.)

But Joaquin Phoenix playing the freaking Joker in an origin story? C’mon, that has to be good… right?

For some reason, even though this particular Joker movie isn’t scheduled to hit theaters until October 4th, 2019, we’ve been getting a heavy dose of photos from the set and behind the scenes of the film.

Today is another one of those days as we even more new set photos from the upcoming Joker movie that show stars Joaquin Phoenix and Zazie Beetz shooting some scenes for the upcoming film.

Director Todd Phillips has also been sharing some cool behind the scenes pics and video including Phoenix’s camera test.

Joker centers around the iconic arch nemesis and is an original, standalone story not seen before on the big screen. Todd Phillips’ exploration of Arthur Fleck (Joaquin Phoenix), a man disregarded by society, is not only a gritty character study, but also a broader cautionary tale.

So, are you willing to risk it all and become hyped for this movie or nah?