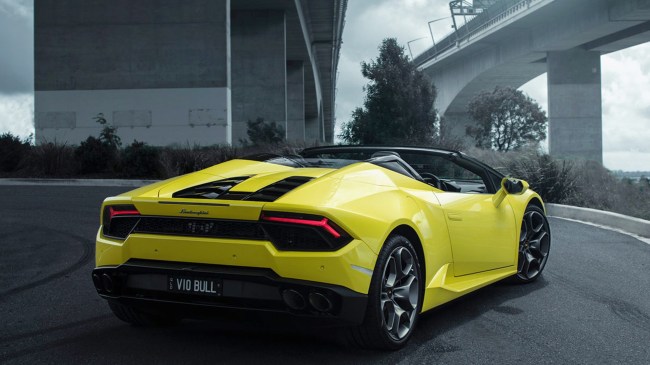 The owner of a brand new Lamborghini Huracan Spyder must’ve been feeling pretty good when they pulled off the lot in their new whip which can sell for $266,325 new. All of those months spent at home with nothing to do and suddenly they’re pulling off the lot in one of the most desirable cars on the planet. Life had probably never felt so sweet.

Then everything went to crap in a matter of minutes. Less than 20 minutes after the brand new Lamborghini left the car lot it was sidelined with engine trouble on the road and then a driver smashed into the Lambo and demolished it. I cannot even begin to imagine the roller coaster of emotions the owner of that Lamborghini went through in such a short period of time.

This all went down in the UK and it’s unclear what the ‘mechanical failure’ was or why that would’ve happened in a car that was less than 20 minutes old.

M1 Ossett today – It’s only a car ! But on this occasion a 20 minute old brand new Lamborghini that stopped due mechanical failure in lane 3 them hit from behind by an innocent motorist #couldhavecried pic.twitter.com/S1f9YEQGcD

The “brand new” Lamborghini stopped due to a mechanical failure and was then hit from behind by an “innocent motorist” on Wednesday, the West Yorkshire Police roads policing unit said on Twitter.

“It’s only a car,” the police tweeted, adding they “#couldhavecried” over the unfortunate destruction of the newly-purchased luxury motor.

A BBC report said the driver of the van that hit the car suffered head injuries in the crash but they were not thought to be serious, while the Lamborghini driver has not been identified. (via CNBC)

I haven’t the faintest idea of how car insurance works in the UK and if this car was covered from the moment it left the lot and to what degree but I’m sure this was a very expensive mishap for someone, whether that someone be the driver, dealership, or insurance agency.

I recalled something similar happening two years ago when a woman destroyed a $500K Ferrari just moments after she rented it and left the lot.

For $266K, I think I’d request the dealership delivered that Lambo straight to my driveway.