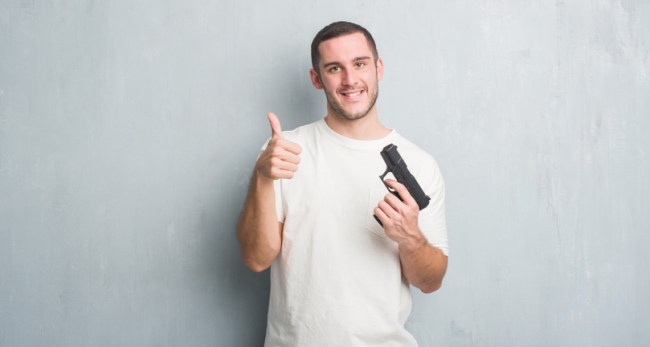 iStockphoto (not the actual shooter)

Old habits die hard. Frats simply cannot stop Plaxico Burressing themselves. Whether they’re producing an alternative, racist Shakespeare-in-the-dungeon piece at Syracuse or shooting pledges in the calf execution-style, you’d have to think frats are not long for this world.

ABC News– Miguel Altamirano was charged with felony aggravated assault with a deadly weapon after he allegedly shot Jonathan Sillas in the leg as he pledged the Kappa Sigma fraternity.

Altamirano could face as many as many as three years in prison if convicted as charged, but his attorney, C.J. McEllhinney, says the shooting wasn’t intentional. He said the shooting happened as the students were “joking around.”

“My client never intended to hurt anyone and is remorseful that Mr. Sillas was injured,” McEllhinney said. This unfortunate incident occurred in the context of a fraternity event.“

Sillas, a criminal justice major, said Kappa Sigma fraternity members pulled him aside and ordered him to turn around during an initiation event. He said he was expecting to get hit with a paddle from behind, but he never imagined he’d be shot.

Poor guy. Sounds like he was fully prepared for the paddle. No big deal. Might be sore to sit for a day or two, but he’s been through worse. WRONG! GUN! Bullet hole in the leg. Whoopsie daisies! Imagine expecting the paddle and getting shot instead? Christ, that would ruffle even Gandhi’s feathers. That’s worse than ordering a whopper and finding out they gave you the impossible burger instead.

But as Altamirano’s lawyer said, it’s important to remember the context. Like when people find a poorly-aged tweet from some NBA player when he was twelve, or when some idiot transcribes a Kevin Hart bit about throwing a dollhouse at his son and it doesn’t exactly read well. In this case, you have to remember that these guys were “joking around” in the “context of a fraternity event.” The place probably had guns everywhere, like when Neo says “I need guns. Lots of guns.” Probably couldn’t take three steps without stumbling upon a loaded gat.

In THAT context, it all makes perfect sense.

PS- found this glorious photo from 1955 of a hazing ritual at Union College. Guy had to pull a 150-pound ball back to campus from a  local high school. See how happy he is? No guns in sight, just good, clean fun. Let’s get back to basics, brothers. 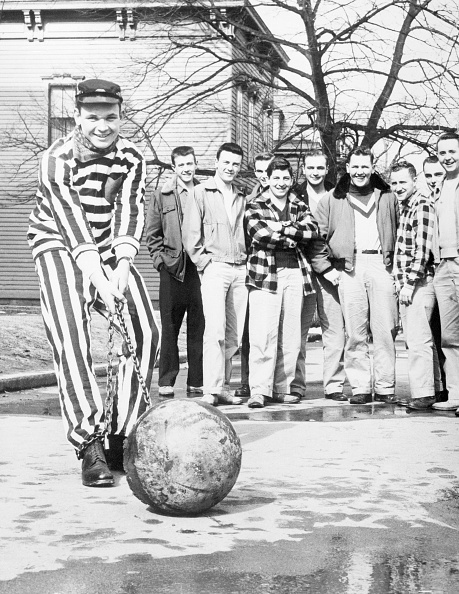