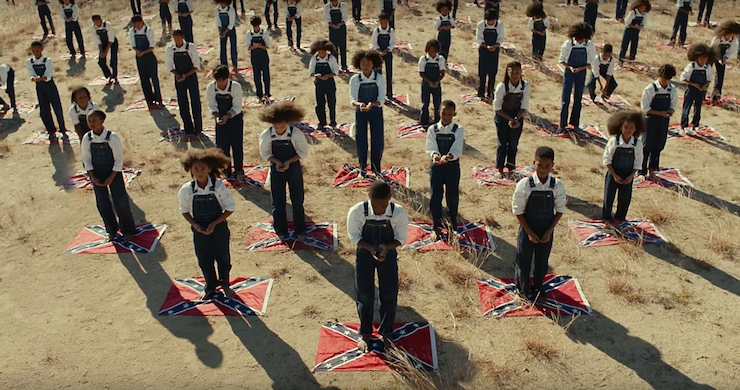 Welcome to the BroBible New Music Round-Up, where we see what new music has been released this week and are biding our time before we continue watching ‘The Sopranos’ clips on YouTube. For updates, follow me on Twitter for more:  @ryanoconnell79

Listen up everyone. Gary Clark Jr. is back and he is not messing around. Clark has always been one of the most ferocious guitar players in the game today, but on his new single “This Land,” the Austin six-string slinger is bringing some of that fire to his message.

Clark hasn’t tackled race that much in his music, but that appears to have changed. “This Land” is a powerful indictment on the current state of racism in America, starting from the jump with the first few words of the song: “Paranoid and pissed off/Now that I got the money/50 acres with a Model A/Right in the middle of Trump country.” He goes on to talk about his neighbors “looking out their window” and how they “can’t wait to call the police on me.”

Speaking to Rolling Stone, Clark spoke about the song’s message, saying “I think it’s only right at this point in time, if you have a microphone louder than others, to speak out about that anger.” He went on to say that “I haven’t been through shit compared to my people. But if I can do anything with my opportunity, and say thank you to Dr. Martin Luther King for sacrificing your life so that I can have a microphone … that’s the least I can do.”

Clark’s new album THIS LAND comes out on March 1st and reportedly has him taking more chances than he did on his last album, 2015’s The Story of Sonny Boy Slim. Clark goes from “acoustic country blues, Prince-like epics, dub-reggae jams and more” on the album.

The Weeknd/Gesaffelstein “Lost In The Fire”

If you were getting tired of Drake-related beefs, you might want to brace yourself because we may have a new one, or a renewed one, on our hands and no, it has nothing to do with Alabama football. That’s like, so earlier this week.

First, some context. The Weeknd has a new song with the French DJ Gesaffelstein, a song that will appear on the DJ’s upcoming album Hyperion. The song is good. The song is smooth, sounds slightly futuristic. Yet what’s getting people’s attention are the following lines: “I just want a baby with the right one / ‘Cause I could never be the one to hide one.”

As we all know, Drake was outed for having a secret child way back in 2018, news that spilled into his ongoing feud with Kanye. Yet what some might not know is that Drake and The Weeknd, fellow Canadians, had a falling out after Drake dropped Take Care and The Weeknd politely declined to sign with Drake’s OVO Sound label. Drake, as is his tendency to do, quite possibly then threw some shade at The Weeknd in “5Am In Toronto” when he said “A couple albums dropped, those are still on the shelf / I bet them sh*ts would have popped if I was willin’ to help.” The albums in question would be Trilogy, which The Weeknd released by his lonesome.

Guys, everything seems to have worked out for both of you since then. Let’s just drop the (alleged) talk of babies on the DL and move on. Focus on the Raptors. They look great this year. Although let’s be honest, is any sports team really itching for Drake’s fandom these days?

Catfish and the Bottlemen “Longshot”

This Welsh band with a name that rivals Hootie and the Blowfish in terms of mind-boggling absurdity are back with their first new music since their 2016 album The Ride. In a day and age when Imagine Dragons are considered a front-line rock band (and also maybe “the worst band of all time,”) energetic rock music from an energetic young rock band is a welcome sight.

The band’s name does pique a person’s interest though, for better or worse. If you’re curious, you can read about how they got their name in this interview from 2014. TL;DR: IT’S A CUTE STORY SO BACK THE EFF OFF!

What do you think will happen first: Offset releases his album or the government reopens?

The latest offering from Galactic’s upcoming album Already Ready Already is as low key smooth as the first single, “Clap Your Hands” was rambunctious and lively. The new owners of the legendary New Orleans’ club Tiptina’s new album might be one of the ones I’m looking forward to most, at least in these first few months of 2018.

Galactic are at their best when the dance back and forth between creator of wild party jams and playing the role of nimble backing band. If the first two songs released from Already Ready Already are any indication, it looks like this album could be the perfect combination of both.

You know what Tedeschi Trucks Band are? They are reliable. Of course they are more than that, but first and foremost, the band is reliable. You can count on them to consistently produce honest to goodness, down home R&B infused rock ‘n roll. We can sleep on our appreciation of reliability when it comes to the bands and musicians we love, but it really is one of the most important factors in the sustaining of a long and fruitful relationship between a musician and their fans. Sometimes you just like to know what you’re going to get. That’s what I like about Tedeschi Trucks Band.

“Hard Case” is the first song off of their new album, Signs, which is the band’s fourth studio album. Did you know that there are 12 members in this band? 12! So not only are they disapproving the idea that a husband and wife can’t successfully work together (which may or may not actually be a real idea or something I just made up,) but they are proving that you can make a band with an insane amount of members work. We will not listen to your bitching about members power trios!

The album was co-produced by Derek Trucks and comes after an unfortunate run of family members and friends dying, a string of losses that “colors portions of Signs.”

Signs comes out on February 15.

This Nick Waterhouse cat is a tried and true throw back. His music, a dirty, classic-sounding R&B, sounds like it was recorded in 1965, popped in a time capsule, that time capsule was buried in a park somewhere and was then dug up a few years ago. There’s no shortage of throwback-sounding bands and singers out there and a lot of them are good, but there’s something about Waterhouse that pushes him ahead of them.

“Song For Winners” is off of his forthcoming, self-titled album, which is set to be released in early March.

Kehlani could be primed for a big 2018, so if you’re looking to buy some stock, she’s definitely someone to consider. Back in 2017 she released SweetSexySavage and last year she appeared on Cardi B’s album. In a recent interview with Zane Lowe, Kehlani said that she had been in the studio and a new album was in the works, as well as a mixtape that could be released in February. In a recent conversation with my dog, I once again asked WHAT THE HELL IS DIFFERENCE BETWEEN A MIXTAPE AND AN ALBUM.

My dog declined to comment, even she is getting sick of that joke.

Michael Franti & Spearhead “Where the Sun Begins to Shine”

Michael Franti & Spearhead’s new album, Stay Human Vol. II, is set to be released later this month and this is the second single from it they’ve dropped. This comes on the heels of a documentary Franti did, Stay Human “which chronicles the musician’s travels as he met with “heroic everyday people” to discover “what is means to be and stay human.” Franti and his band will be touring, promoting the documentary and the new album.

This Week’s Kind of a Cool Idea

I’m not sure you know about this, but there’s a currently a little bit of a dust up here in this country of ours regarding a wall. I know, no one is talking about. However, one person who is talking about it is Pink Floyd co-founder Roger Waters. At a recent appearance in London, promoting an exhibition about the band’s history, Waters said he was kicking around the idea of performing the band’s legendary album The Wall somewhere on the U.S./Mexico border.

(Editor’s note: Ryan is not in a position to make such promises.)

Here, You Need This Just As Much As I Do

I could watch Elvis doing Karate all day. pic.twitter.com/egD2oG91eD

An Obligatory Note About The Sopranos

This week marks the twentieth anniversary of The Sopranos. I know, just like this wall, no one is talking about it. So with that being said, I think we should all sit back for not even two minutes, and appreciate how effin’ fantastic the show’s opening was.

And we’d be remiss to not give some love to the band behind that song.

“Woke Up This Morning” was written by Alabama 3, an English band that’s specialty was a mix of electronica, blues, alternative rock and acid jazz. Fun fact about the band is that every member goes by an alias. Another is that in America, they are known as A3, so as not to confuse anyone with the country band Alabama.

All flights are non-stop unless something goes horribly wrong

The man has a point.