A Bunch Of New, REALLY Good Pics And Video Of Joaquin Phoenix’s ‘Joker’ Movie Have Hit The Web 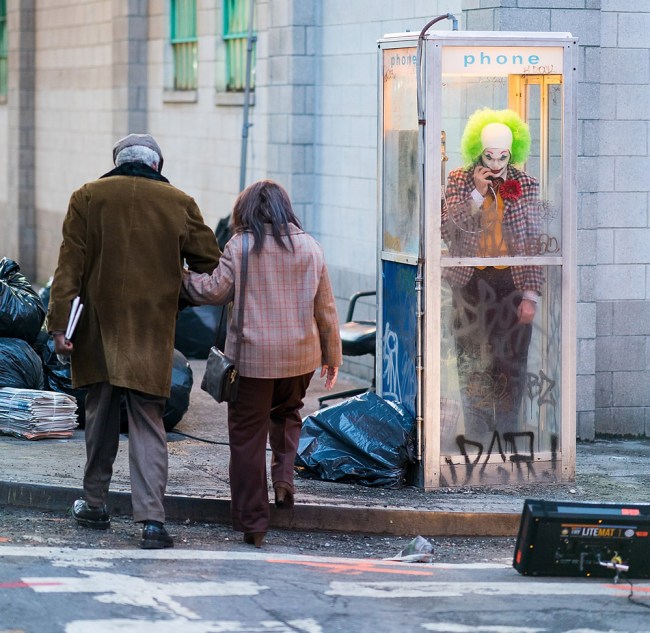 When I first heard that there was going to be ANOTHER DC Comics movie with the Joker in it my first thought was, “Why?” For one, no one is ever going to top Heath Ledger’s portrayal of The Clown Prince of Crime. And two, Jared Leto, and perhaps more accurately, Suicide Squad writer-director David Ayer, pretty much killed the character in my book.

Heck, even Ayer himself admitted on Twitter last month that he basically blew it.

Yes I have to fall on that sword. It was one step too far. https://t.co/WE80aWUTwy

Now, however, after seeing several photos and videos from the set of Phoenix’s Joker film, I have to admit that I am all in for this flick.

Call me a comic book movie optimist, but it looks to me like this version of the Joker will actually be unique, true to the comics, AND not be completely over the top.

“No. And I haven’t seen any grillz up to this point,” Joker star Zazie Beetz recently joked at ACE Comic Con when asked if this Joker will be sporting any facial tattoos.

And while I would assume that normally movies like this would prefer to keep things under wraps, the fact that they are shooting the Joker movie in and around New York and Newark, rather than on a set somewhere, means that fans are being treated to a ton of good looks at the production.

Which, in turn, I believe, has turned people like me from being ambivalent about the movie to actually *gasp* being excited.

Check out some of the latest pics and video below and see if they make you excited too.

#JoaquinPhoenix in full clown costume on the set of the #Joker movie pic.twitter.com/RdVnwy3XWe

#JoaquinPhoenix cackles manically as he films in costume as #TheJoker on the set of new movie https://t.co/FKcItQYkC6

So. The Joaquin Phoenix/Joker movie has been shooting in my neighborhood pic.twitter.com/5BTOToimSE