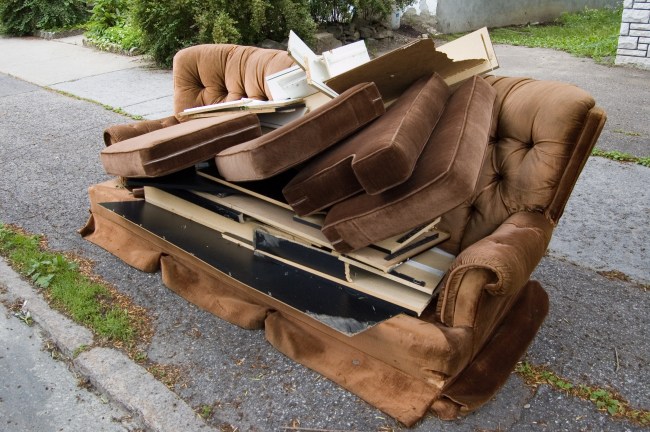 Have you ever been to a friend’s home where you sat on their couch and immediately started feeling itchy? Maybe you spotted a stain, or things smell slightly off, but you just know that the couch has been through some BAD years. The wrong sort of people have “crashed” on it. It’s a living organism. If you had better vision, you might be able to see it move.

Disgusting, right? Except these days, New Yorkers are embracing the coolness of rescuing petri dish furniture from the curb, and they call it “stooping”:

They were just a few of the items that have been found discarded on the stoops or streets of New York City over the past year, a byproduct of the pandemic that has amounted to such an abundance of valuable trash that some are calling it “The Golden Age of Free Stuff.”

The bonanza of freebies has prompted New Yorkers to prowl the city every day, combing through trash as if they were panning for gold, even at the risk of carrying bedbugs home.

Looking through other people’s trash and dragging away used objects isn’t new. But what has come to be known as “stooping,” or more recently, “trash stalking,” has become so widespread since the start of the pandemic that several Instagram accounts devoted to it have attracted thousands of followers and transformed what used to be a niche activity into a phenomenon.

Another major driver, simply put, is boredom. Stooping has given people a creative outlet as well as an opportunity to get out of the house. “I have a lot of people who used to think that going through trash was disgusting but who now see the value,” Ms. Wolff said.“The pandemic made this trendy. It’s cool now.”

You can call it stooping, trash stalking, recycling, enterprising, discerning… it’s trash. You’re decorating your home with trash. Here’s why: Facebook marketplace and Craigslist have made it incredibly easy for people to sell anything they own. People who want to get rid of anything that has any value will list their things for sale. If they end up lugging their couch or mattress or arm chair out to the street and leaving it on the curb, that’s because they couldn’t stand the smell of that thing for one second longer. Those are dead bodies, rotting in their living rooms. Those pieces of furniture are decreasing the value of their homes. They’re embarrassing them.

Check out these winners:

A post shared by Stooping in Queens New York (@stoopinginqueens)

It’s rare to find a flatscreen TV in the late stages of scurvy.

Feel like a nostalgia whack? Slump in this chair and let your spine fall to pieces as you thump away to vintage Pam.

Holy moly! Bad day to be the local Office Max, am I right?!?! Bet these work!

Look, are there some gems to be found? Probably. But the vast majority of this garbage is garbage. Three-legged dining chair sitting completely alone in a drift of yellow snow? Leave it. You don’t need it. It’s not “perfectly good.”

The problem with these instagram accounts is that we’re encouraging hoarding at a time when people need to be trimming the fat. Somehow, we’ve gamified hoarding by turning it into some social media treasure hunt.

[Domarc Dayondon] started following various social media accounts on stooping, and quickly got addicted to it, likening it to playing “Pokémon Go” in which “you’re going on an adventure and seeing if you get rewarded.”

“It’s just a very slippery slope and I’m getting bogged down with furniture that I don’t need,” he said. He contacted Ms. Wolff to ask her: “Is there a stooping A. A.? Because I might need one.”

Haha Domarc, you goose!! A stooping AA! How about instead of joking about a possible treatment for your hoarding addiction, you recognize that you actually have a problem and STOP? This is not an adventure. You are not being rewarded. You are collecting trash and storing it in your home.

The first step towards recovery is admitting that you have a problem. Steps 2-12 are all about burning whatever bed bug bang buses you brought into your apartment.