Nicolas Cage Talked About Owning Pet Cobras, Buying A Stolen Dinosaur Skull, And His Quest For The Holy Grail In A WILD Interview 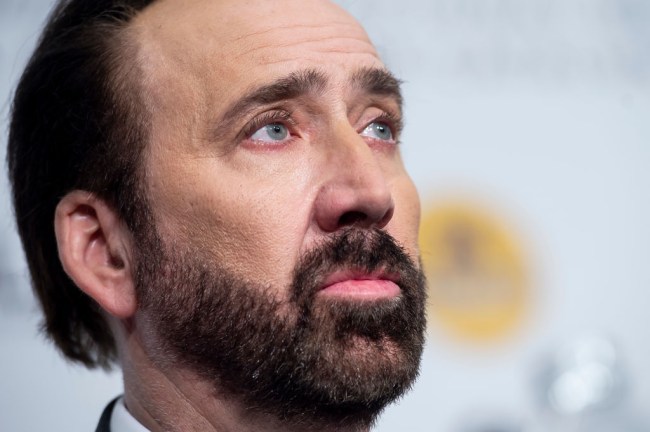 It’s not exactly a secret that Nicolas Cage is a fascinatingly odd bird and he’s repeatedly added to his legend over the years by doing things like accidentally getting married after getting wasted before celebrating the annulment by getting wasted again and hitting up a karaoke bar.

The actor once had a net worth of $150 million but saw that number fall to a paltry $25 million thanks to a series of ill-advised financial decisions that included the purchase of multiple castles, a deserted island, and a dinosaur skull.

Cage recently chatted with The New York Times in a fascinating interview where he discussed an impressively wide variety of topics—including the purchase of the prehistoric fossil, which he was apparently forced to give back after discovering it had been pilfered from Asia:

The dinosaur skull was an unfortunate thing, because I did spend $276,000 on that. I bought it at a legitimate auction and found out it was abducted from Mongolia illegally, and then I had to give it back. Of course it should be awarded to its country of origin. But who knew?

As we previously established, Cage’s love of alcohol has resulted in him making some questionable decisions but it appears he’s done the same thing while sober, as he revealed he went through a period where he was less concerned with drinking and more concerned with tracking down the Holy Grail.

Here’s what he had to say about his quest:

“I started following mythology, and I was finding properties that aligned with that. It was almost like National Treasure… One thing would lead to another. It’s like when you build a library.

He says he eventually traveled to England as part of his hunt for the sacred cup before heading to Rhode Island after hearing rumors it may have somehow have ended up there, and after buying a home in the state, he came to terms with the fact that he may never find it, saying: “What is the Grail but Earth itself?”

Cage then pivoted to talk about the time he decided it would be a good idea to add a couple of snakes to his personal collection before giving them up when his neighbors expressed their displeasure:

I did have two king cobras, and they were not happy. They would try to hypnotize me by showing me their backs, and then they’d lunge at me. After I told that story on Letterman, the neighborhood wasn’t too pleased that I had cobras, so I had them re-homed in a zoo.

Did I mention he also had a cat that kept trying to eat the shrooms his friend gave him? No?

The cat — a friend of mine gave me this bag of mushrooms, and my cat would go in my refrigerator and grab it, almost like he knew what it was. He loved it. Then I started going, “I guess I’ll do it.” It was a peaceful and beautiful experience. But I subsequently threw them out.

It’s Nic Cage’s world and we’re just living in it.