Despite All His Rage, Here Is A Screaming Karaoke Cover Of ‘Purple Rain’ By Nicolas Cage 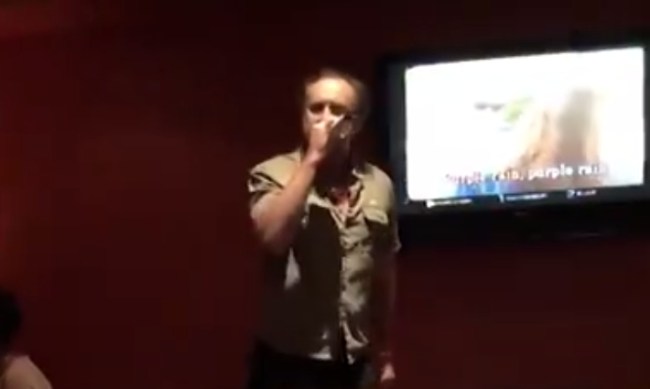 If you always wished for Nicolas Cage getting drunk in a Koreatown karaoke bar and singing Prince’s Purple Rain, today is your lucky day. Nicolas Cage is living a very unique life. He’s had a very roller coaster acting career, with when he was at the pinnacle of his career he had a net worth of $150 million.

At one point, Cage owned 15 different properties, a Gulfstream jet, the first Superman comic from 1938 worth $150,000, a $450,000 Lamborghini once owned by the Shah of Iran, a $150,000 pet octopus, two albino king cobras, and a $276,000 7-million-year-old dinosaur skull, which he outbid Leonardo DiCaprio for and ended up being stolen and had to be returned to the Mongolian government.

However, we are now a long way away from Nic Cage’s heyday of the late 1990s/early 2000s that included Leaving Las Vegas, The Rock, City of Angels, Face/Off, Con Air, Gone in 60 Seconds and National Treasure. Now Nic Cage has a net worth of only $25 million. That kind of demise plus relationship turmoil can cause a man to become furious and that is exactly what Nicolas Cage did a karaoke bar.

In March, Cage got married to his girlfriend Erika Koike. The 55-year-old actor and makeup artist had been dating for a year before they suddenly decided to get married in Las Vegas because the heart wants what the heart wants.

However, love does not always last forever like in a Nic Cage rom-com and sometimes it doesn’t last a week. Hours after the happy couple tied the knot in holy matrimony in Vegas, the newlyweds were seen screaming at each other outside the Bellagio hotel. Cage got married on a Saturday night and by Wednesday afternoon he had filed for an annulment. Nic says his girlfriend tricked him into marrying her by plying him with copious amounts of alcohol.

Nicolas Cage's wife Erika Koike demands spousal support from actor following FOUR DAY marriage … after he admitted he was 'too drunk' to tie the knot pic.twitter.com/bj5SRXbmcu

In the annulment, Cage said, “[Erika] suggested to [Nic] that they should marry, [Nic] reacted on impulse and without the ability to recognize or understand the full impact of his actions.” Now Koike wants spousal support in the form of cash money for everything she has been through during their four-day marriage.

Now Nicolas Cage is dealing with his heartbreak the way that any red-blooded man would… getting plastered, going to a karaoke bar and screaming a death metal version of Prince’s Purple Rain. Quite the transcendent rendition of the Prince classic. Singing a drunk screamo version of Purple Rain at a karaoke bar in L.A.’s Koreatown is what one tends to do when their fourth marriage falls apart within four days. Despite all his rage, he is still just Nicolas Cage.

You can watch the mesmerizing video over at TMZ.

Let it all out Nic, you’ll feel better afterward.

This performance was not in Nic’s finest vocal effort. Cage can apparently sing and did sang his own croony vocals in the 1990 movie Wild at Heart.