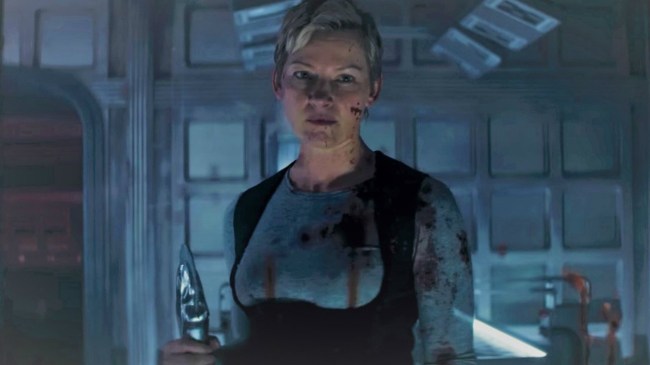 Game of Thrones is done filming, but George R.R. Martin is working on the possible GoT spinoffs. He’s also STILL working on the Winds of Winter book (Many have given up all hope of reading in their lifetime). The busy Mr. Martin also has one of his other works being made into a TV series and it is called Nightflyers and it looks creepy as hell.

During the San Diego Comic-Con, the Syfy Channel debuted the first official trailer for Nightflyers. Martin said the upcoming space horror thriller will be like “Psycho in space.” In the science-fiction book that was written in 1980, the crew is on a voyage to an interstellar spacecraft that has a mysterious alien race called the “volcryn.” The humans need help from the volcryn because their planet is dying, but there is one warning: “do not bring the Nightflyer back to Earth.”

There was a movie made of Martin’s novella, and the writer noted that the new TV show will correct a long-standing issue he had with the film.

I gotta admit, for a Syfy show this looks pretty darn intriguing and a smidge more realistic than Sharknado 2. based on the terrifying trailer, it looks like a TV version of the movie Event Horizon mixed with a little bit of Alien, and Dead Space. Nightflyers will debut in the fall and stars Eoin Macken, Gretchen Mol, David Ajala, Jodie Turner-Smith, and Angus Sampson.