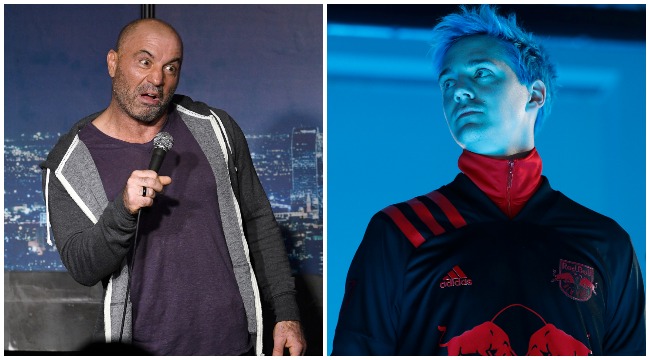 Joe Rogan done did it this time, pissing off a large swarth of the 164 million Americans who partake in the leading form of entertainment today: video games.

In his recent JRE episode with author, fitness guru and businessman Joe De Sena, Rogan sounded off on the merits of an industry that raked in $43.4 billion in annual sales in 2018 and represent a diverse melting pot of the American population.

“Video games a real problem. You know why? Because they’re f**king fun. You do them, and they’re real exciting, but you don’t get anywhere.”

Joe Rogan has described video games as a “waste of time” for 'most people': https://t.co/8phVgmGYP9 pic.twitter.com/HGVgCfr7mh

Rogan has first-hand experience with the pitfalls of video games, claiming in a recent Hannibal Buress episode that his video game addiction caused him stress and was impacting his sleep schedule to the point where his producer (Jamie) claimed he had a “problem.”

No one is more of an authority in the gaming world than Ninja, one of the world’s most prominent streamer, YouTuber, and professional gamer. Ninja currently has nearly 15 million followers on Twitch, making him the most followed account on the entire platform. Recently, he was reportedly paid between $20-$30 million by Amazon to leave Amazon’s Twitch streaming service.

The 29-year-old issued a two-minute video response to Rogan pooping on his path, claiming that “Joe doesn’t really understand the full context of what the gaming community is and how many different avenues you can be successful in gaming.”

Mind was kinda everywhere but wanted to get a little vid out to explain it sooner rather than later.

Ninja claims that there are increasingly more avenues for gamers to have a successful and lucrative career in the industry, like streaming, content creation, and coaching. Yes, esports coaching.

I just want to add/reiterate

Joe Rogan is a gamer, hands down the dudes loves them and is pretty well informed on the competitive side/aspect of it. I just believe there is a huge gap of the last 5 years where gaming has catipulted into a different era and would love to explain https://t.co/aSvL5VsTiX

Ninja’s response comes in the wake of hundreds of gamers ripping Rogan for dismissing things that cannot be monetized as a waste of time, neglecting to consider the mental health/unwinding benefits video games have on the lives of millions of Americans.