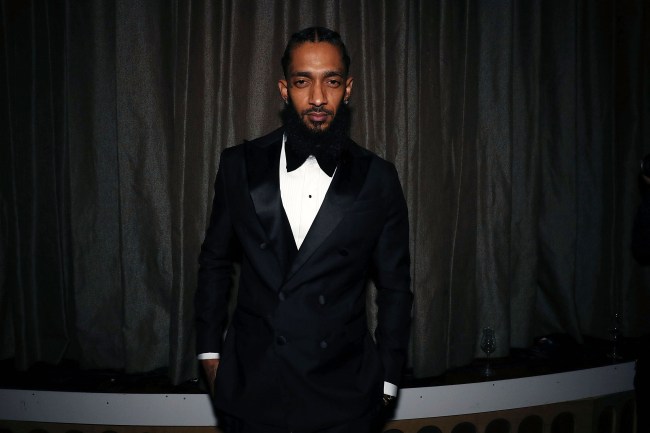 Eric Holder, the wannabe rapper suspected of shooting rapper Nipsey Hussle to death and wounding two other men at Hussle’s clothing store in Los Angeles, is believed to have killed out of envy of Hussle’s success.

LAPD Chief Michel Moore said the shooter’s motivation was fueled by a personal dispute with Hussle, but would not elaborate as the investigation is still ongoing.

Eric Holder, the 29-year-old Los Angeles man identified by the LAPD as the suspect wanted in the shooting death of Nipsey Hussle, goes by the names Shitty Cuz and Fly Mac: https://t.co/TsRa0mkR5A pic.twitter.com/htJ6sIeKap

Herman Douglas, who was an associate of Nipsey and sold the rappers CDs in the trunk of his car before he hit it big, claims to be one of the last people to see the 33-year-old alive, outside his Marathon Clothing store in L.A.

Douglas told the Los Angeles Times that Holder, who goes by rap name Fly Mac, shot up the store in broad daylight out of “jealousy.”

“It was nothing but jealousy and envy. It was a senseless murder…Me and Nipsey was talking, and the dude that shot him, came up and shook our hands. Said he was a rapper and all this old bullshit. Shook our hands, the dude went to get his burger. He left.”

Douglas claimed he went back inside the clothing store with his own food, leaving Nispey’s side for “three seconds” before Holder returned shooting.

“What seems to be a less talented rapper had envy and hate in his eyes, it was nothing else. There was no motive, no beef, nothing. Nothing but envy, hate. I hope when they catch him, I hope he get s slow death.”

“[Holder] was a local guy, local enough that when he hit that parking lot, we put our guard down. You know, he’s one of us. We wouldn’t let just anybody up in our parking lot like that. We put our guard down because he had just shook me and Nipsey’s hand prior to that and came right back and shot him. Like I said, it was jealousy.”

Nipsey Hussle’s death hit hard for many people, not just as an artist but as a human being. The rapper was scheduled to meet with Police Commission President Steve Soboroff to discuss gang violence and how to help local youth, one of his many endeavors to try to make the lives of the underprivileged better.

“He was a gifted and brilliant artist, an entrepreneur who found global success, who was working closely with this city to save lives and transform them, even as he was doing that for himself,” Mayor Eric Garcetti said. “He was a tireless advocate for the young people of this city and this world, to lift them up with possibility and to not be imprisoned by where you come from or past mistakes.”

RIP to a good one.