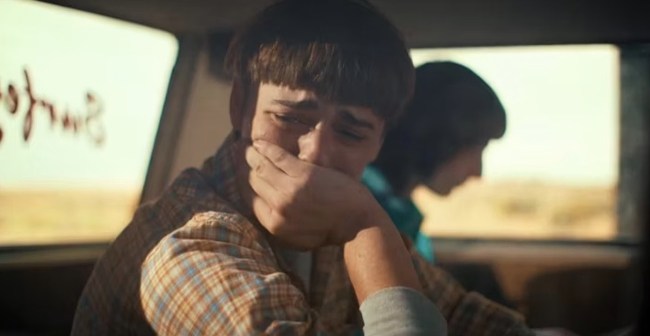 After much speculation about the sexuality of Will Byers following the release of Stranger Things 4, the actor who plays him (and is also apparently Doja Cat’s mortal enemy) Noah Schnapp has confirmed that the character is gay and is in love with his best friend Mike Wheeler.

During a recent interview with Variety, Schnapp — who made headlines in recent weeks for sharing DMs he received from Doja Cat, who was asking to be connected with Eddie Munson actor Joseph Quinn — confirmed that the character he plays is, in fact, gay and is in love with Mike, the character that’s played by Finn Wolfhard and is dating Millie Bobby Brown’s Eleven in the show.

It was hinted at in Season 1: It was always kind of there, but you never really knew, is it just him growing up slower than his friends? Now that he’s gotten older, they made it a very real, obvious thing. Now it’s 100% clear that he is gay and he does love Mike. But before, it was a slow arc. I think it is done so beautifully, because it’s so easy to make a character just like all of a sudden be gay,” Schanpp told Variety.

While Will’s sexuality was teased in previous seasons — Mike once literally said to him something along the lines of “it’s not my fault you don’t like girls” — the implication was made explicit in Stranger Things 4.

Both Stranger Things 4 Vol. 1 and Vol 2. — which features a 2.5-hour-long season finale — are currently streaming on Netflix.

RELATED: The Duffer Brothers Explain The Ending Of ‘Stranger Things’ Season 4 While Cast Reacts To Most Disturbing Scene