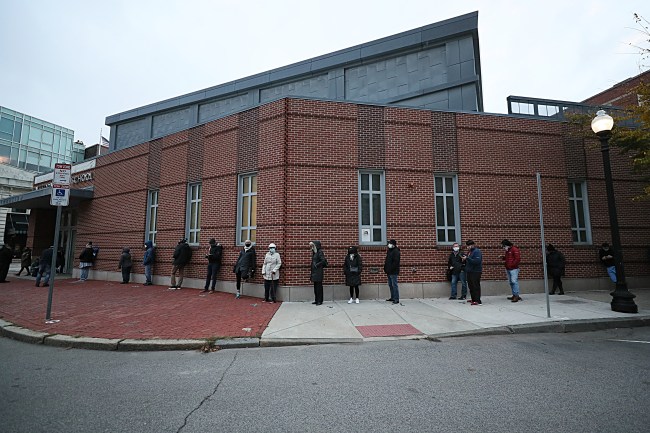 We stood with our hands in our pockets, nervously shifting from one foot to the other against the brisk November day. Nobody spoke, nobody laughed. The day had finally arrived. It was real now; we were close. A sniffle here to reel in a runny nose, the only sound other than a dry leaf rustling across the sidewalk. Most of us averted our eyes, looking off into the middle nowhere, looking down at our feet, toeing a pebble. Nearly everyone wore a mask. Even so, our eyes betrayed our anticipation, our nervousness, our excitement. Almost, now.

“I can’t believe we’re finally doing this,” said the guy in front of me in line. He spoke perhaps to himself, choosing “we” instead of “I” as though recognizing that this was bigger than him, bigger than all of us. We shuffled a few steps forward, maintaining our social distance. What a wild year.

For many of us, this day could not have come soon enough. For others, it had crept up and now, all of a sudden, we were here. From the moment I saw the invitation to register, I had gone back and forth. It felt impersonal and anonymous; the numbers were daunting. Would I even matter? Would I even count? I told myself I could always back out. But then, as the day neared, I realized I had been lying all along. There was no chance I could sit idly from the sidelines and watch it all unfold. I needed to participate.

At the door, a man asked for my paperwork. I handed him the forms, my hands trembling slightly. He looked them over briefly, then glanced up at me.

I nodded solemnly. Then, I took my place in a second line and waited. No turning back now. One after another, those in front of me were pushed through a door on the urging of some volunteer wearing an earpiece. They went in at maybe four-minute intervals, sometimes much quicker. The turnover was impressive. The operation was a well-oiled machine.

Finally, I was standing at the front. “Your turn,” said the man. As I opened the door, my pulse quickened, the hairs in my nostrils stiffened, and all my senses came alive.

It’s not every day that your favorite two-time AVN Award nominee Sarah Jay gives her most committed fans the chance to purchase a raffle ticket for her 50-person limited blowbang. But it’s exactly why we love her: she gives back. She’s a true woman of the people, someone who doesn’t forget the little guys who helped get her where she is today. Arguably the GOAT of the MILF category, currently ranked #30 on a prestigious adult film star ranking (and trending upwards), and with more than 240 films to her name, Sarah was kneeling before me on a glistening air mattress, surrounded by a phalanx of cameramen and lighting technicians, sweating heavily, her mascara running, looking like the beautiful princess she is.

She beckoned me forward.

As ready as I’ll ever be.