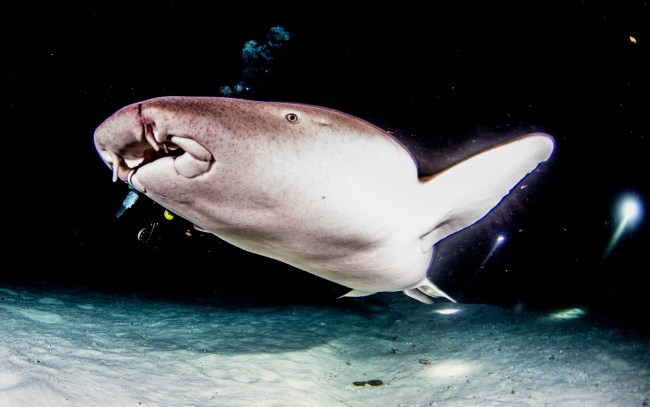 If you had to write up a list of every shark on the planet and the relative danger they pose to humans if a person were to bellyflop on top of the shark I think the Nurse Shark would rank pretty close to the bottom, as in they really aren’t considered a threat.

I’m having trouble wording this correctly because there really aren’t any sharks out there that pose a regular threat to humans. I wouldn’t want to hop in the water unprotected and go swimming with Bull Sharks or Tiger Sharks in murky water but there aren’t any shark species out there swimming around looking for people to feast on. It just doesn’t happen.

But I think of Nurse Sharks as those ‘suckerfish’ our teachers had in the class aquarium back in 3rd Grade. They’ve just got bigger mouths and some teeth. But relatively speaking, they want nothing to do with people. That said, they always seem to be around. Hanging near docks and marinas looking for easy handouts from the fishermen.

In this case, a Florida Man named Jeremy Porter emerged from the water at Jensen Beach (Port St. Lucie) with a Nurse Shark attached to his arm. The shark refused to let go. Even after it was dragged out of the water and up on the sand with rescue workers around. Still, the stubborn shark refused to relent and held tight. You gotta give it up for this shark’s relentlessness.

No, this guy isn’t cradling a baby shark. This nurse shark latched onto him in Jensen Beach. I’m talking to the lifeguard who responded to the situation today on @CBS12. pic.twitter.com/vSmEsEaskj

Yikes! A man swimming at a Florida beach over the weekend had a small nurse shark latch onto his arm https://t.co/Vd1uvcwuAz pic.twitter.com/UEr3m1TT2K

As I was searching YouTube for that clip above I came across a few ‘Nurse Shark Bites Person’ clips from Florida over the past few years. Encounters with these seemingly lazy sharks are rare but it’s obvious they are quite stubborn once they latch on. So word to the wise, don’t let a Nurse Shark get ahold of your arm or leg.

Here’s a quick explanation from biologists on how the bite from a Nurse Shark works:

I think it’s best to just avoid these sharks altogether. They’re fun to look at but there’s no reason to get close.