Odell Beckham Jr. Breaks Down The 10 Things He Can’t Live Without On The Road 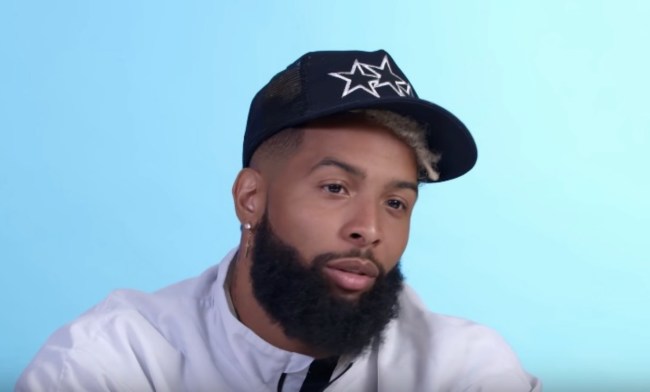 Few NFL players are talked about more right now than Cleveland Browns wide receiver Odell Beckham Jr. OBJ went off on Monday Night Football for 161-yards and a touchdown on 6 receptions (10 targets) all while wearing a fake $2 million Richard Mille watch that had everyone talking again.

Odell Beckham Jr.’s already one of the league leaders in receiving yards on the season, sitting in 4th place with 232 yards through two games. Cincinnati’s John Ross is leading the league by the way with 270 yards. That puts him ahead of Sammy Watkins’ 247 and Marquise Brown’s 233 yards for the Ravens.

OBJ recently sat down with GQ Sports‘ YouTube for a recurring segment where they get athletes and celebrities to discuss the 10 things they can’t live without while on the road. Here, OBJ shows us what a multi-millionaire playboy’s everyday carry collection looks like.

I don’t think anyone will be shocked to see that the first thing OBJ shows off his is Richard Mille watch, the same one he wore in Week 1 of the NFL season. There’s nobody on this planet trying harder right now to get a deal with Richard Mille than OBJ and I respect the hustle.

So what did his list look like? First up was his now infamous $330K Richard Mille watch in that color that borders on the Cleveland Browns orange. He admittedly sometimes forgets to manually reset the time when traveling across time zones. Let’s be honest here and admit this is 100% jewelry and not an actual time-telling device to him. It’s not like he’s ever without his iPhone’s clock.

The other items included Mike & Ike candy, one of the most overrated candies of all time. His Blue + Red wallet is kind of reminiscent of his days with the New York Giants. Next up is Trident gum. I’m not a big gum guy myself but I get it. It keeps your breath fresh and burns that nervous energy. He then claims he always travels with Glide sticks for flossing. This just seems like an unnecessary flex on the rest of us who struggle to remember to floss. More power to him if this is legit but I call b.s. on this one.

For cologne, Odell Beckham Jr.’s rocking the ‘Unforgiveable’ by Sean John. I can’t say I’m familiar with this scent but I’m sure it works for him. His next item is Chapstick. If you’re traveling on the regular you need to have Chapstick. Your skin and lips dry out on planes from the altitude and you’re often going from humid to dry conditions and vice versa. He then shows off his chargers. These are my #1 travel items. I’m a Mophie guy. He needs to get with the best.

Carrying playing cards at all times seems a bit unncessary but who am I to judge? I just question who has enough time to casually play cards each and every day. With his chain he says it seems like a materialistic item but it’s probably his most meaningful because of the loss of his dog. He says there’s no price tag for this one, and he practices in it every day.

This wouldn’t be complete without him showing of his Nikes. He’s a Nike-sponsored athlete and I’m a little surprised he didn’t show these off first but I knew they were coming. The dude has pretty much every pair on the planet, he loves shoes, and gets to wear a different pair every day. Good for him.

The last item, his Dopp Kit, is a Louis Vuitton bag he bought in Dubai. “We were in Dubai and I needed something and it was right there” is actually probably the only time someone has told the truth about buying a Louis Vuitton bag on a whim. I fully believe that he was in Dubai, needed a bag, and that was the only store right there.

And there you have it. OBJ’s 10 essentials for a life on the road.