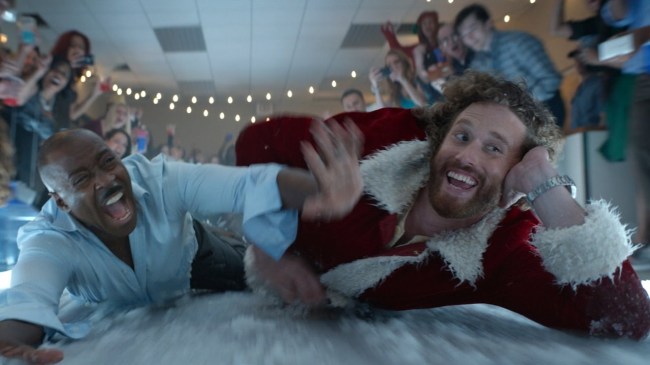 It’s that time of year when your office holiday party’s being planned and you’re stoked to get yourself all liquored up to finally ask out that cute girl from the marketing department. While that may be your objective, though, you’ll probably want to rethink the strategy, because the last thing you want to be is the jackass who everyone’s laughing at the day after the office holiday party.

Since I really care about your well-being — and keeping your job — I’ve scoured the Internet for some A+ advice from career and etiquette experts to help you both survive the office holiday party intact, while also having a good time without embarrassing yourself. Remember, just because there’s a bunch of booze to choose from, doesn’t mean you should treat this like a frat social, bros, so try to be on your best behavior.

At my office holiday party last year, I definitely didn’t follow this rule — so learn from my mistakes, guys. Rather than have a couple drinks, as was the plan, I decided to lead the group shots and, by the end of the night, I ended up singing Toby Keith’s “Beer For My Horses” with Roger Clemens. What a memory, right?

Remember, the office holiday party isn’t a wedding, because you work with these people every single day, so don’t treat the open bar as an invitation to drink as much as you want. Carlota Zimmerman, a career expert based in Los Angeles, agrees, per Glassdoor.

“Don’t presume that your colleagues and managers won’t notice if you make six trips to the bar, [even] if you can hold your booze like a statue,” she said. “Stop after two and drink water. The next day you want people to remember you for how charming you were, not your ability to hold 15 gin and tonics.”

You might be the life of the party, but do it on a couple of drinks, not while completely black out.

Dress As You Would For An Interview

It may be your fifth year with the company, but you should still maintain a level of respect for you and your colleagues. That means wearing something classy enough to show your personal style, while not going all gaudy with your outfit. As a total curveball, if it’s relatively known that you’re the “funny guy” of the office, it’s OK to wear something a little out there to get some laughs — like a holiday sweater or something.

According to New York Times best-selling workplace author Joseph Grenny, per Glassdoor, don’t be afraid to ask coworkers about their outfits.

“Ask around to find out what others are wearing. The invitation may suggest the attire, but you never know how the suggestion will be translated,” Grenny said. “Check with your co-workers, then dress slightly above average.”

That’s a good tip, because you don’t want to be too casual or too flashy.

Conversation Should Be Cordial (And Not About Work)

Nobody likes being the group at the office holiday party who only talks about work and starts bringing up old sh*t to cause drama, so avoid any talk of work while together — especially when alcohol’s involved and your mind might be a bit fuzzy.

Instead, get to know your coworkers outside of the office by asking what their interests are and what plans they have, if any, for the upcoming holidays. Sure, it’s kind of boring small talk, but your mind needs to shift from being a Saturday night out to being with people who rely on you to talk to clients or be a professional. I know, it’s kind of awful, right?

According to Jacquelyn Youst, a Pennsylvania-based etiquette consultant, per Glassdoor, never get too personal with a coworker while talking at the office holiday party.

“Use the office holiday party to connect with colleagues and build working relationships. Keep conversation about vacation travels, children’s achievements, etc. Be mindful not to get too personal or discuss divorces or health problems.”

You may have to talk about things that are boring AF, but, hey, you’ve got to play the game, fellas.

Don’t Forget To Say ‘Thanks’ Before Heading Out

Sure, your boss or manager probably didn’t have sh*t to do with the planning of the office holiday party, but it still goes a long way by thanking them and telling them you had a good time — even if you really didn’t. It’s like thanking someone for a bad gift at the holidays, when you’re just being polite.

Amber Hunter, an employee experience director at A Plus Benefits agrees, telling Glassdoor that you can make a big impression on your boss by simply saying thank you.

“Send a quick email or thank-you note to your company leaders after the party,” Hunter said. “It will go a long way.”

This means you’ve got to show your appreciation before leaving the office holiday party to some of the higher-ups, then following up the next day with an email or handwritten note. Doing something like this shows your true character and gratitude, and, believe it or not, is something that most of your colleagues probably won’t do — so it’s a way to stand out, too.

Your office holiday party is a time to unwind a little bit and celebrate the entire company surviving another year together. It’s a chance to toast to those who bug the hell out of you everyday with emails and tasks, and who you’ve sworn off in private thousands of times. But, hey, all that’s forgotten when you’re throwing back shots together and are fully into the holiday spirit, so enjoy it, bros.

You can read some of the other tips from experts over on Glassdoor so that you can totally win your office holiday party this year.