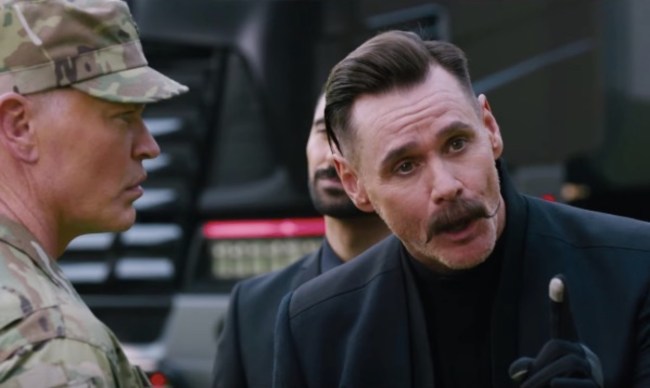 I’m sure you’ve heard by now that the world is about to be graced with a Sonic the Hedgehog (2019) film starring Ben Schwartz as the voice of Sonic. Ben’s probably best known as Jean Ralphio from Parks and Rec but he’ll be an overnight worldwide star when this movie his theaters and he stars alongside Jim Carrey as Dr. Ivo Robotnik and James Marsden as Tom Wachowski.

The film will hit theaters on November 8, 2019, and it’s sure to make a fortune off millennials who were raised playing Sonic on Sega. The first official trailer for the film dropped this morning after an image leaked yesterday showing Jim Carrey’s bizarre Dr. Robotnik mustache and sure enough, Carrey’s got that mustache on display and it’s a mirror image of the video game.

Growing up, I never played The Legend of Zelda or Final Fantasy. I wasn’t particularly good at Quake or Half-Life. But I could literally shut my brain down and play Sonic for hours without a break (when my parents would let me). This movie will be a super-sized dose of nostalgia for me and I really, really, REALLY hope they don’t fuck it up:

We ALWAYS have to be skeptical when a video game is adapted into a movie. Historically speaking, Hollywood almost always fucks it up when they try and flip a video game into a big screen story. This doesn’t happen 100% of the time but I think saying that Hollywood ruins video game adaptations at least 90% of the time is fair. My biggest concern so far with the film is the physical rendering of Sonic. He looks like stuffed animal you’d win at the county fair.

There isn’t a ton of source material to go on here because Sonic wasn’t really a storyline video game in the same way that a lot of other video game movie adaptations are which I think could actually play well here. They’ve got a solid cast in place so the expectations are high.

Regardless of the quality of this film, with a release date near Thanksgiving, I’m certain that this movie will make a fortune and we’ll get a sequel somewhere down the line.