O.J. Simpson’s Ex-Manager Claims He Bragged About A Wild Sex Encounter In 1990 With Kris Jenner, His Best Friend’s Wife 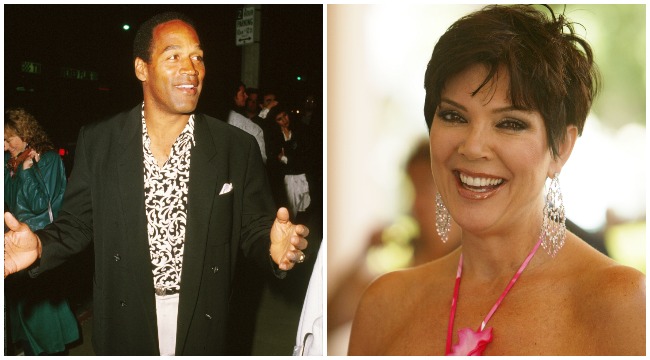 Guys, not sure if you’ve been following the news for the past two decades, but O.J. Simpson is kind of a bad guy.

By some egregious miscarriage of justice, Simpson is a free man after spending nine years in the slammer for armed robbery he committed in Las Vegas in 2007. He’s been walking with the law-abiding public since October 2017.

If you were on the fence about the character of the infamous former NFL star, consider this story from O.J.’s former manager, Norman Pardo.

In his new documentary, “Who Killed Nicole?” Pardo, who managed Simpson from 1999 to 2012 and has 70 hours of videotape of his former friend, alleges that Simpson bragged about rough sex he had with Kris Kardashian, his best friend’s wife, in a hot tub back in 1990.

According to Page Six, Simpson and his then-wife Nicole were in a hot tub with Robert and Kris while vacationing together before Nicole and Robert called it a night and headed inside. Simpson, then 44, and Kris, 36, were left alone in the water before the O.J. made his intentions clear.

“‘O.J. said he stood up, pulled his shorts down and, I’ll give you exactly what he said: ‘Her eyes bugged out of her head and I f–ked that B until I broke her,’” Pardo recounts on camera in a segment previewed exclusively by The Post.

“That was as messed up as you can possibly get.”

Pardo goes on to claim that the hot tub incident had terminating effects for both relationships, as the Kardashians divorced in 1991 and the Simpsons split in 1992.

As if betraying your wife and you best friend wasn’t enough, Pardo claimed that the encounter caused Kris physical pain.

Simpson, now 71, boasted of the rendezvous — and the damage his menacingly large manhood had apparently inflicted — to Pardo during a 2003 limo ride from Raleigh, NC, to a paid appearance at an Atlanta nightclub, the ex-manager told The Post.

Pardo claimed that this was par for the course for Simpson, who had a history of objectifying women and a proclivity to be the dominant partner.

In one scene, the disgraced halfback recounts a cheeky conversation with a sexual conquest: “The last girl told me that if I wasn’t 10 inches, she wasn’t interested. I said, ‘I like you. I’m a little turned on. But I’m not gonna cut two inches off for nobody.’”

At the time of this writing, Kris Jenner and O.J. Simpson have not commented on the claims.